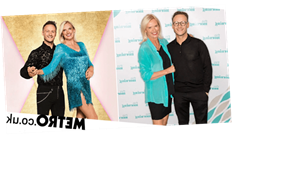 The dancer announced today that he would be leaving the BBC hit show after seven years. He was partnered with presenting icon Anneka for Strictly’s most recent series, where they were eliminated in the second week of the competition.

Taking to Instagram, Anneka posted a snap of her and Kevin in front of a helicopter, where she dropped a cheeky little reference to the iconic show Challenge Anneka – and hinted there are bigger things to come for the dancer.

‘Do you want a lift to your next adventure Kevin Clifton?’ Anneka wrote.

‘Excited to hear your news today because you’ll have something massive up your sleeve!’

Kevin also posted his news on social media today – where he looked back at his accomplishments over the past seven years in a lengthy post.

He wrote: ‘The past 7 years have been some of the most wonderful years of my life. I am grateful to the BBC and Strictly Come Dancing for giving me the opportunity to have been a part of something truly special.

‘Since first being called Kevin From Grimsby by Sir Bruce Forsyth in 2013 I have experienced the highs of 5 finals, winning a Guinness World record on It Takes Two, the Strictly Arena tour glitterball and then the ultimate of winning the 2018 series with Stacey Dooley.

‘After finishing last series with the Children In Need trophy and the Christmas Special I want to leave on a high and have therefore decided the time has come to move on and focus on other areas of my life and career.’

Following Kevin’s announcement, Strictly issued a statement reading: ‘Kevin has been such a brilliant part of Strictly for the past seven years.’

Strictly Come Dancing returns to BBC One this year.