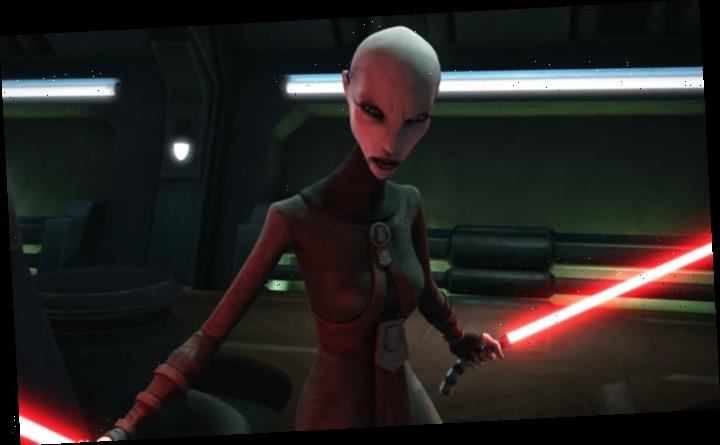 They say a hero is only as good as their villain, and Star Wars has plenty of great villains. From the pure relentless force of horror that is Darth Vader, to Darth Sidious’ ability to manipulate even the most powerful beings in the galaxy, to Darth Maul’s flair and viciousness, the franchise has no shortage of impressive baddies. That being said, some of them didn’t get the respect they deserve, whether it was their live-action portrayal being a shadow of their animated self (General Grievous), or because they never even made the jump to live-action, like in the case of the badass yet emotionally complex assassin, Asajj Ventress.

Ventress was first introduced all the way back in November of 2003 in Genndy Tartakovsky’s Star Wars: Clone Wars. The now non-canonical show was meant to shine a light on the war that ended the Jedi and the Republic by focusing on the day-to-day battles led by the Jedi Knights. We meet Ventress in an underground battle arena, as Count Dooku surveys the carnage looking for an assassin. Ventress not only manages to easily defeat (and outright kill) her opponents with ease, but she stuns audiences by being not only the first female villainess in Star Wars, but by being the first person to regularly wield two lightsabers at once (Anakin Skywalker does it very briefly in Attack of the Clones). When Ventress is sent to fight Anakin, she manages to destroy his entire clone unit and spaceship, before dueling the young Jedi on the fourth moon of Yavin. It is one epic fight that takes place in a jungle, while it rains, and ends at the top of the ruins of an ancient temple, as Ventress challenges Anakin to the point where he’s forced to tap into the dark side to win, and in the process making Asajj Ventress fall down a cliff to a certain death.

The next time we saw Ventress was in 2008’s Star Wars: The Clone Wars film, which serves as a pilot for the TV show of the same name directed by Dave Filoni. In the film and show, Ventress is Dooku’s apprentice, working to secure alliances for the Separatists and killing anyone who refuses to side with the Count. This being a more kid-friendly show and Ventress being a recurring character, she doesn’t immediately die, but instead loses every fight against the Jedi, which only increases Dooku’s disappointment and fuels Ventress’ rivalry and distaste for the other big figure in the Separatist forces – General Grievous. Still, she becomes a big thorn in the side of the Jedi, particularly Anakin, Ahsoka Tano, and Obi-Wan Kenobi. She develops a bit of a relationship with Obi-Wan in particular, as they always flirted and bantered while fighting, which Obi-Wan refers to at one point as a power play by Ventress.

By season 3, Asajj Ventress went from pawn to victim. In the episode “Nightsisters,” Darth Sidious begins to see Ventress as a liability and a threat as she’s growing stronger in the dark side of the Force, so he orders Count Dooku to eliminate her. Ventress survives, but knowing she was betrayed by her master, she vows to take revenge and flees to her ancestral home of Dathomir to enlist the help of her kinswomen – the Nightsisters. In this episode, Ventress reaches a point in her character development that not even Darth Maul managed to get, as Ventress started to realize that serving the dark side only brings pain and suffering. We also got to learn about her backstory, and see how Ventress was sold to a slaver by the leader of her coven to make peace with a band of criminals, and how she was taken in by Jedi Master Ky Narec after her master died in a pirate raid. The slave-turned-padawan eventually fell to the dark side after her Jedi Master also died in an attack by pirates.

More than any Star Wars villain except Anakin, Asajj Ventress is more than just a dark side user – she was a victim of circumstance and neglect. If The Clone Wars taught us anything, it’s that the Jedi Order was but a shadow of its former glory, an organization with a much higher reputation than it was able to live up to, and more often than not, their small failures had immense consequences.

If things had been different, Asajj Ventress may have become a great Jedi, but even as a Sith apprentice, she still had conflict in her that made her want to help out on occasion.

A Free Agent And A Hero

After being betrayed by her mentor, Asajj Ventress decided to find her own path. Much like Maul tried to become a crime lord, Ventress gave bounty hunting a shot. In season 4, she even teamed up with future legend Boba Fett in a dangerous mission. If The Clone Wars was about how the war made enemies of very similar people that could have otherwise understood each other, then Asajj Ventress and Ahsoka Tano could have become good friends under different circumstances. Both started out from a place where they joined an ancient order thinking they would find a place to belong, believing in the ideals of that order. Both fought and learned from great masters, but both were betrayed by the order they had pledged allegiance to, as Ventress was betrayed by Dooku and Ahsoka was betrayed by the Jedi Order that wanted to expel her based on hearsay. Indeed, Ventress even helped save Obi-Wan’s life, teaming up with him to fight against Darth Maul and his brother, Savage Opress. She later teamed up with Ahsoka Tano when Tano was falsely accused of crimes against the Jedi and helped clear her name.

Asajj Ventress’ story only gets more complicated after The Clone Wars. Though her story was set to continue, the show was cancelled before the stories could get finished, so her story was told in the canonical novel Dark Disciple. When the Jedi Council tried to close in on Dooku’s location, they sent undercover Jedi Master Quinlan Vos to find Ventress and gain her trust so she would tell him what she knew about Dooku. Understandably, she very much wanted to get Dooku herself, so they teamed up. Vos was very much like Ventress: both were conflicted, fierce, powerful, and very independent. Ventress knew it was all a set-up, but she still found herself falling in love with the Jedi spy, and she even ended up sacrificing her life to save Quinlan Vos. In the end, Ventress never got her revenge, and died a tragic figure in the Jedi/Sith war, belonging to neither side, but having walked on both sides of the Force without compromising who she was.

Outside of Anakin and Kylo Ren, Ventress was the most complex villain in the entire Star Wars franchise, having been manipulated by many parties, but still managing to make her own destiny in the end. Even if she hasn’t made the jump to live-action, Asajj Ventress remains one of the best villains in the galaxy far, far away – and the most under-appreciated one.