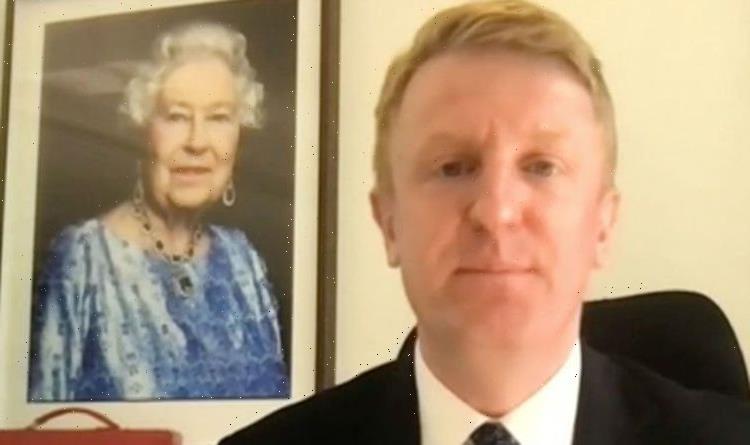 BBC Breakfast hosts Dan Walker, 44, and Louise Minchin, 52, were joined by the Secretary of State for Digital, Culture, Media and Sport, Mr Dowden, 42, to discuss several topical headlines. As the pandemic continues and with social distancing restrictions still in place, the Government minister spoke via video call from his office. However, eagle-eyed viewers of the BBC news show noticed Her Majesty Queen Elizabeth II, 95, made an appearance on her birthday.

The huge picture was situated over the politician’s left shoulder and although it was rather prominent, neither host mentioned it.

Taking to Twitter, one viewer wrote: “What’s the betting that picture of Liz is swapped out for a poster of Nickleback when the cameras stop rolling…#BBCBreakfast.”

Another fan posted: “In that picture behind Oliver Dowden has the queen been stung by a bee? #BBCBreakfast.”

Whilst a third commented on the social media platform: “What is going on with the picture behind this clown #BBCBreakfast?”

“I guess Dowden got the memo about backdrops for interviews #bbcbreakfast,” a fourth shared. 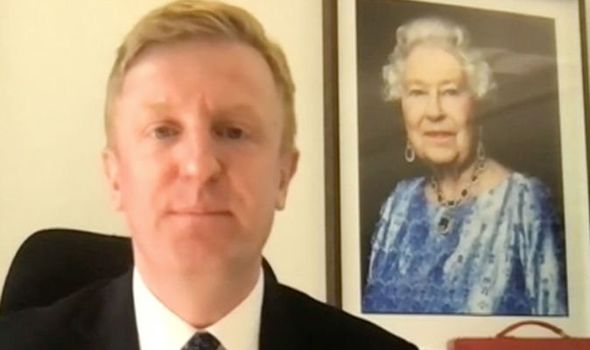 However, other viewers seemed more interested in a Union Flag being absent from the frame following the backlash the programme has faced in the last few weeks for sporting the flag in the background of interviews.

“Where’s his flag? #BBCBreakfast,” a fifth wrote whilst a sixth jokingly recalled a conversation between the minister and his assistant over whether to put up a picture of the monarch.

“Assistant – ‘I know, I’ll print off an A3 picture of the Queen and stick it over that poster of the tennis player scratching her a***.’

“Dowden – ‘Oh, Timmy what would I do without you?’ #BBCBreakfast,” they concluded.