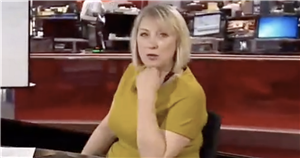 A BBC News anchor was stunned after the wrong photos appeared on the screen of the Queen when she was speaking about a whale in the River Thames.

The baby minke whale had become stranded on Sunday (May 9) and had to be put down yesterday (May 10) after efforts to free her repeatedly failed.

But when speaking about the story of the day, BBC news anchor Martine Croxall was baffled to see images of Queen Elizabeth II pop on screen.

She said: "The search continues to locate an injured whale in the River Thames after it escaped in a first rescue attempt.

"That was the Queen with her lifesaving badge on her swimsuit. I didn't have time to tell you, I don't know why.

"Anyway, let's talk about sport shall we."

She passed it on swiftly to the sports anchor who quipped: "Nicely done, Martine."

Ms Croxall shared the mistake on her own account, writing: "This is one of the reasons I love my job."

The awkward blunder from yesterday afternoon was picked up by eagle-eyed viewers who shared it on Twitter.

One user tweeted: "The BBC mixing up a missing whale and the Queen swimming."

The juvenile whale was stuck and later freed from Richmond Lock before it became stranded a second time in Teddington.

Rescuers said the mammal's condition had deteriorated "rapidly" and a vet team ended its "suffering".

Hundreds of passers-by gathered along riverbanks in south-west London after the whale was first sighted on Sunday.

The story which the photos were reflecting on was from the Queen's first time speaking publicly since the death of her husband Prince Philip.

Last week, Her Majesty spoke held a virtual call with the Royal Life Saving Society who work across 30 Commonwealth countries to prevent deaths by drowning.

The footage from the meeting was released yesterday where the Queen was told she was the first person to receive the lifesaving swimming badge.

When told that she was indeed the first receiver ever, the monarch said she never realised that was the case.

She also cracked a joke about her age after hearing it was "80 years ago", saying: "That's terrible."