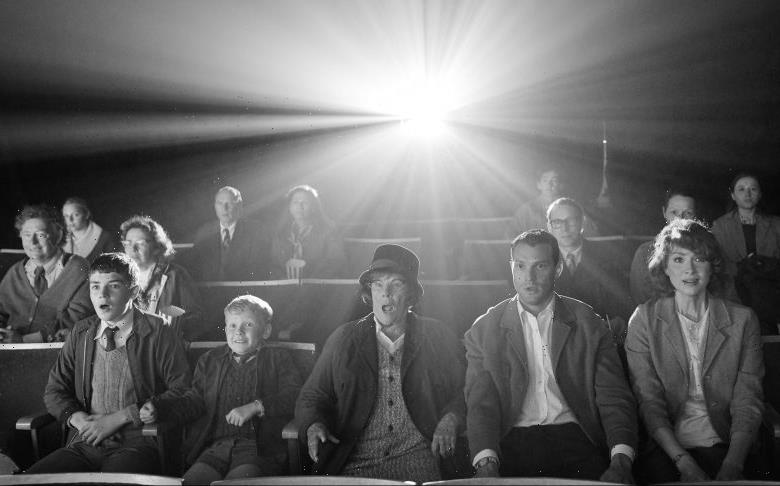 A black-and-white cine-memoir that’s remembered through rose-colored glasses, Kenneth Branagh’s cutesy and broadly unaffecting “Belfast” is every bit the contradiction in terms that it sounds like. Some of that seems by design: Inspired by the writer-director’s bittersweet impressions of being a nine-year-old boy in Northern Ireland as the Troubles first spread to his street (which was still integrated between Protestants and Catholics in the summer of 1969), Branagh’s film is the portrait of a fading Shangri-La.

His “Belfast” is the story of a little kid experiencing his first crush as molotov cocktails explode onto the cobblestones outside his bedroom window; of falling in love with the fantasy of the movies as his parents’ marriage begins to strain under the pressure of deciding whether the family should stay in the only home they’ve ever known or flee to another country in the commonwealth. It was the best of times, it was the worst of times, and this scattershot crowd-pleaser renders them both in such broad strokes that it seems as if Branagh can only imagine the Belfast of his youth as a brogue-accented blend of other movies like it.

That too seems by design — at least up to a point. In stark contrast to so many films about or informed by the violence that plagued the city during the latter half of the 20th century, “Belfast” opts for romanticism over realism at every turn. Here is a movie that wants to feel like a Movie, and that artificially sweetened tone helps mitigate the fact that its protagonist appears to live on a studio backlot.

The first time we see Buddy (played by “A Christmas Story”-cute newcomer Jude Hill), he’s sword-fighting a happy swarm of other kids in a frenzied street scene that doesn’t evoke Northern Island so much as it does Neverland. Alas, the fun is short-lived: A mob of angry Protestants round the corner with torches in hand, looking to cleanse the neighborhood of the remaining Catholics. While the rest of “Belfast” awkwardly splits the difference between the likes of “Roma” and “The Wonder Years” (or is it an Oscar-friendly riff on “The Long Day Closes?”), this opening sequence is cut together from so many conflicting angles that you can sense Branagh’s unmistakable hand behind the camera. The “Hamlet” director may no longer be synonymous with the Bard, but his shot lists still convey all the drama of a Shakespearean tragedy.

For a Protestant kid who lives inside a glossy prestige picture, it stands to reason that Buddy’s unnamed parents should both look like movie stars. His formidable but frequently absent father is played by “Wild Mountain Thyme” actor Jamie Dornan, who balances his excellent performance between the decency of a man who refuses to raise a fist to his neighbor and the fragility of a man who’s concerned about the well-being of his wife and sons. “Outlander” breakout Caitríona Balfe plays Buddy’s similarly beautiful mother (who has no reservations about staying in Belfast), and Branagh shoots her with the supernatural elegance of a grown man trying to picture what his mom looked like in her prime.

Balfe is likewise terrific — Branagh is wise to put the film’s most pivotal speech on her shoulders — but the acting was never going to be the problem here. Not with a cast that also includes Dame Judi Dench as Buddy’s spicy grandma, the wonderful Ciarán Hinds as her ailing husband of 1,000 years (and Buddy’s favorite confidant), and “Merlin” star Colin Morgan as a bloodthirsty thug who won’t rest until he’s conscripted every Protestant man on the block into his gang.

Branagh creates a vivid sense of Buddy’s home life — warm, chaotic, rooted to the soil — and of a city that’s rapid descent into violence threatens to smash the idyllic snow-globe that contains his entire world. Kids aren’t typically great with change and it only gets harder when that change augers an imminent civil war. Buddy can’t leave Belfast now; not when he’s finally making inroads with his school crush (a Catholic girl!) and learning the secret art of nicking candy from the local shop.

As if that weren’t enough, Buddy is also in the throes of a spiritual crisis, as the bellicose, Wellesian minister at his church scares the boy into drawing a literal road map that divines heaven from hell. It’s an adorable detail in a film full of adorable details, and an underwritten thread in a film that doesn’t have any other kind (it should be worth mentioning that Buddy has an older brother, but the character’s only apparent purpose is to add texture to the shots of Buddy and his dad sitting on the couch in their house).

Time passes, grandpa’s cough gets worse, and the streets outside begin to feel like the set of a Western, but our Buddy is lost in his own little world — a place soundtracked by an incessant string of Van Morrison songs that strain to convey some of the happy-go-lucky kid energy that’s missing from so much of the camerawork. It’s a telling detail of a very personal film that — despite shimmering with the essence of Branagh’s love — sorely lacks a point-of-view or a sense of cohesion (it’s plenty charming, often dull, and seldom believable). Is Buddy a stand-in for the director? A conduit for his memories? Or, perhaps most poignantly, a vision of the boy that Branagh once was and may have continued to be had fate not intervened?

“There’s only one right answer,” Buddy says when talking to his grandpa about the brewing Troubles. “If that were true,” his grandpa replies, “people wouldn’t be blowing themselves up all across this town.” The scenes between these two characters are reliably the most saccharine in the film and also several of the best. Hinds is the rare actor so magnificent that he can endow trailer-ready inspirational dialogue with the weight of lived history while sitting on an outdoor toilet. “You know who you are,” Buddy’s loving grandpa tells him at one point early on, and that moment only resonates louder as Branagh’s helpless feelings of regret creep into his film’s closing stretch.

The influence of Buddy’s grandmother is affecting as well, particularly when they bond over their shared love of spectacle; be it a stage production of “A Christmas Carol” or a screening of “Chitty Chitty Bang Bang” that the whole family reacts to as if they were in the apocryphal first audience to see the Lumière brothers’ film “The Arrival of a Train.” “Belfast” erupts into color during these sporadic moments, as if Buddy’s brain were catching on fire.

We can’t really say because we never get to see behind his eyes. The better-supported interpretation is that Branagh remembers or imagines this experience as a crucial part of his origin story. When Buddy’s grandma lowers her guard and waxes poetic about seeing Frank Capra’s “Lost Horizon” many years ago, she talks about Shangri-La as if it were a place she longs to return to. She doesn’t know it yet, but Belfast will be a Shangri-La of Buddy’s very own, and she’ll be waiting there for him with the boy’s grandfather for as long as it takes. With “Belfast,” Branagh has found a way to go back, and only a cynic would begrudge him that. All we can hope is that he feels more at home than we do in his city of lost dreams.

“Belfast” premiered at the 2021 Telluride Film Festival. Focus Features will release it in theaters on Friday, November 12, 2021.