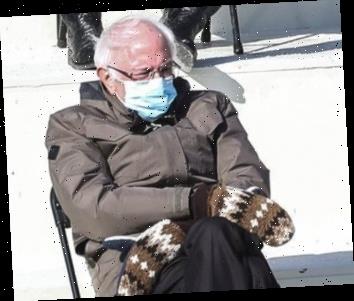 Bernie Sanders came to Late Night with Seth Meyers tonight. As expected, all anyone wanted to hear about was those memes.

If you’ve been on social media at all in the last two days, you’ve undoubtedly seen the theme and variations of Bernie Sanders at the Joe Biden-Kamala Harris inauguration on Wednesday.

Sanders, the 79-year-old Vermont Democratic Senator, was seen wearing a short beige overcoat and brown and white mittens, a style in stark contrast to the formal overcoats and black gloves of most of the attendees.

Naturally, the look drew comment from observers on social media, who particularly unleashed on one shot of Sanders sitting with his arms crossed, looking like approaching him would lead to a death sentence. Remarks abounded that he was waiting for his wife outside a department store or about to shovel the driveway.

Sanders told Meyers that he wasn’t aware of the instant iconography he was creating by his attire and pose. He claimed he was “just sitting there, trying to keep warm, trying to pay attention to what was going on.”

The Senator admitted with a smile that he has seen the various permutations of memes, which put him in such situations as sitting on the couch with the cast of Sex and the City, or hanging out on a park bench with Tom Hanks as Forrest Gump.

There was one other mystery surrounding Sanders: What was in the mailing envelope he was carrying on Wednesday? Sanders wouldn’t say, claiming it was “Top secret.”