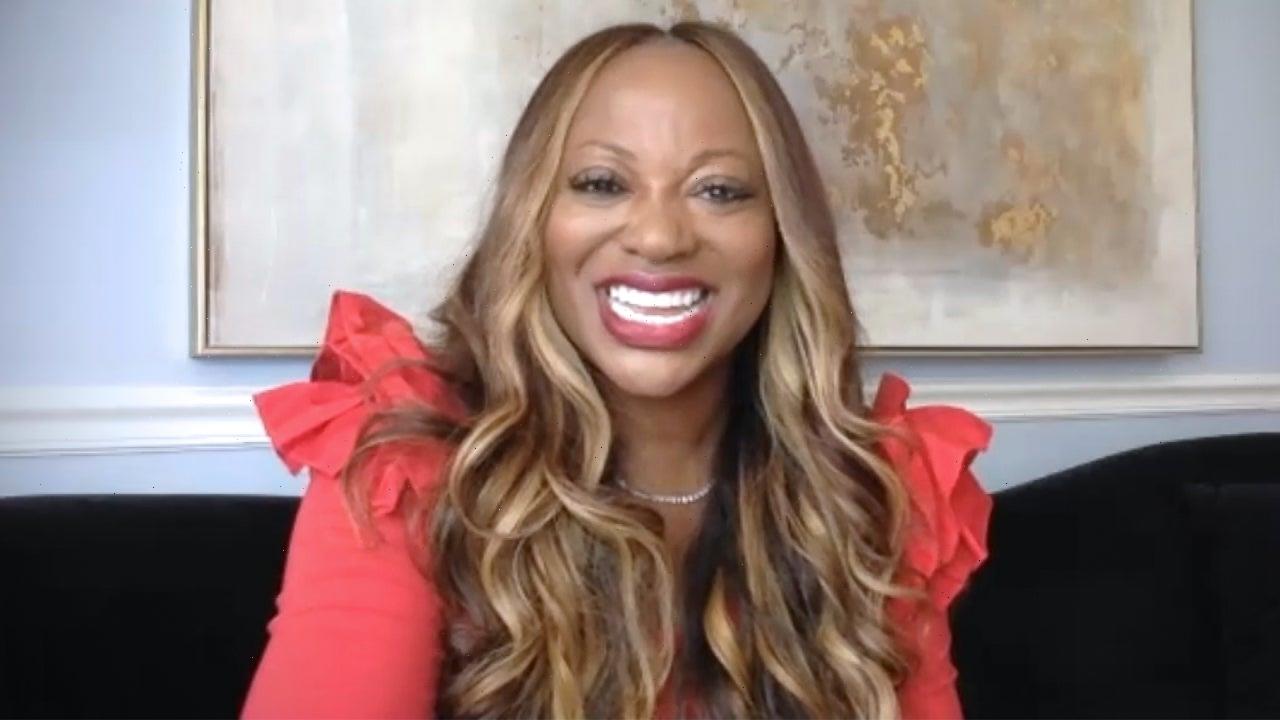 If you ask The Real Housewives of New York City‘s newest “friend of,” Bershan Shaw, about her behavior so far on the show, she’ll tell you she’s simply living up to the series’ name. Well, at least one word in that name: Real.

“I’m just real,” the multipreneur (as she calls herself) tells ET over video chat, just days after season 13’s most explosive episode yet aired, that explosion thanks in large part to Bershan. The RHONY newbie found herself at odds with nearly the entire cast after proclaiming her new pals to be “boring grandmas” at a dinner during a girls’ trip to Salem, Massachusetts. Bershan really went in on longtime star Sonja Morgan, whom she repeatedly called a “clown” and, later, a “ho.”

“When I say something, it’s not meant to be negative,” Bershan explains. “I mean, that went really sort of left, but it’s meant to be who I am. And I think, love me or hate me, I’m going to be as real as they come.”

Seeing as this trip was the first time most of the women had spent any meaningful amount of time with Bershan, they didn’t seem to grasp that concept. Hence, the night going left.

“You realize that, uh-oh, they’re not your friends that you’re used to saying this, so they’re taking it personal,” Bershan admits. “They’re looking like, ‘Grandma?! Have you lost your mind?’ And I say this all the time. So you know what? I guess Bershan had to learn. All right, these aren’t people you’ve known for 20 years, or 15 years. Get to know them. And I guess I learned that I had to get to know them first, right?”

Bershan was a fan of RHONY before joining the cast, leading some viewers to think her name-calling, if one can call it that, was born out of preconceived notions of who these women are, or what she expected them to act like. The motivational speaker says that’s not the case at all.

“It wasn’t like I was trying to read the table and let them have it,” she says, revealing that, if she were to judge the women off of her fan perception, she would’ve called them something other than “grandmas.”

“I came in thinking the women were B-I-T-C-H-E-S, I really did,” Bershan confesses. “But really, they’re not. I really thought I was like, ‘OK, I’m going to be with a bunch of women who are just mean girls. And I don’t feel like it.’ But they’re really not mean girls. They really are great women, all have a different story, all have a different background, and we’re all different. That’s what I love about it. We’re all different.”

Bershan says poking at the women was simply her way of trying to get to know them. Unfortunately, it backfired a bit, especially with Sonja, who in turn called Bershan a “wet blanket.”

“I love Sonja to death,” Bershan says. “She’s beautiful. She’s funny. You don’t need the drinks. You are funny, inspirational, entertaining, without it. And that’s what I was trying to get at. So maybe it was in your face too much, but yeah. … You don’t need the big red shoes on, because you’re amazing anyway.”

Alcohol definitely played a role in the Bershan-Sonja dynamic, seeing as the more wine flowed, the worse the communication got between the pair. Things appear to take a harsh turn in this week’s episode, with a “physical altercation” (Leah McSweeney’s words) that ends with Sonja punching through the plate glass covering of a fire extinguisher.

“Oh, yeah. Yikes,” Bershan says when the moment is brought up. “I mean, I think we had a little bit too much to drink, right? And drinking, it causes some S-H-I-T. Let’s just be clear. But I mean, come on, Sonja and I, we’re not going to get physical. That’s not even in my nature. That’s not in her nature. Let’s be clear.” 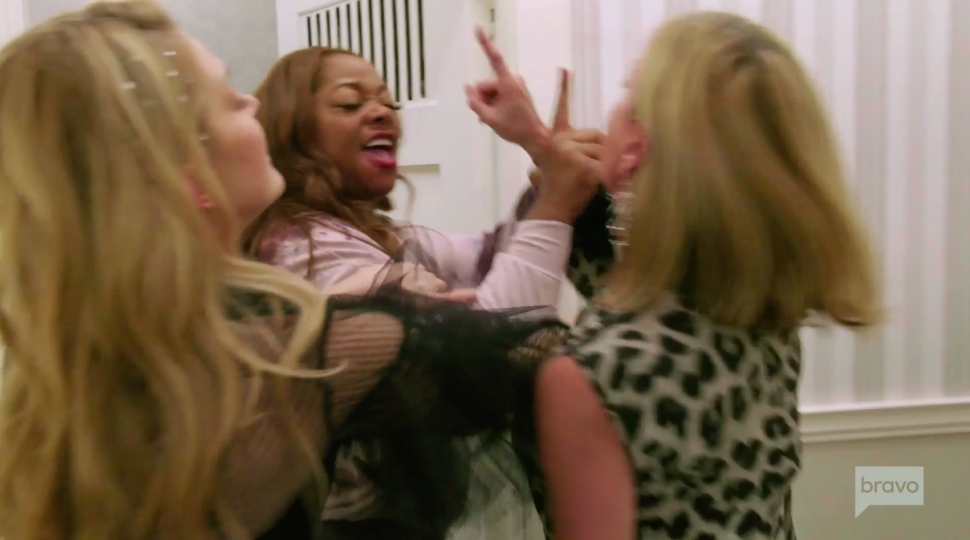 In a preview of this week’s episode, Luann de Lesseps essentially tells Ramona Singer, who introduced Bershan to the group, to give the life coach an ultimatum: Either “fix it” or Bershan is out of the group.

“Look, nobody pushes baby to the corner,” Bershan quips. “But I realized that I went too far, right? I went too far. Even as a coach, I went too far. You know what I mean? The way I coach, I do coach hardcore. I’m in-your-face motivation, I push buttons. This is what I do, and this is how I get results. But it wasn’t that I was coaching, because I was in the moment being real, but it’s just my nature anyway. With friends, with my dad.  … So I apologize, because you know what? I went too far.”

“I could have stopped, too,” Bershan says. “You make mistakes, you fail, you do something wrong. What do you do? You apologize. I’m human, you guys. I’m not Mother Teresa.”

Before things escalated to the glass-punching place, the women did try to get Bershan to pull back. Luann, Leah and Eboni K. Williams spoke to the podcast host about the evening and wondered whether Ramona had set Bershan up in some way. The trio pointed to comments Bershan made about Leah, which seemed to be Ramona’s thoughts regurgitated. But Bershan says Ramona didn’t set her up, at least not in that way.

“She did say it was going to be a lot of fun, she said we’re going to turn up,” Bershan notes. “I was like, ‘I want to have kiki, fun, drinking, loud, crazy.’ So I thought it was like that, and then I felt like we were sort of just sitting at the table looking at each other.”

Bershan promises things take an uptick for the group starting with this week’s episode, and asks the viewers to give the cast a little grace. They filmed season 13 amid the coronavirus pandemic, something she says fans don’t seem to be taking into account as they criticize the latest episodes.

“The girls are good,” Bershan says. “I think you guys are a little bit hard on them. I mean, it was COVID. It was COVID. It was COVID. New York was closed. …You guys are killing us before you see it all. I mean, look, episode 10 is going to be hot. Well, 11, 12, 13, 14. Wait for it. It’s good. It’s some good stuff. I mean, I remember shooting it. I had the time of my life with the ladies, so I think it’s going to get better and better, and you don’t want it all upfront. Wait for it.”

Bershan says RHONY fans should expect “a lot of fun, a lot of kiki’ing, a lot of girl talk” in the back half of season 13. “I mean, look, I think Ramona, her boldness, Sonja, her craziness, Leah, her downtown, Eboni is Eboni. She’s going to talk about what she talks about,” she offers, adding onto the already interesting dynamic between her and Eboni, who is also Black and also new to the franchise this season. The pair didn’t exactly click immediately.

“I don’t think it was a negative or a positive, we’re just different approaches,” Bershan remarks. Some viewers (and, well, ‘Wives themselves) have complained about Eboni “preaching” to the women about race issues. Eboni has defended her onscreen discussions as authentic to who she is and what she cares about, even if the Ramonas of the world don’t want to talk about race issues, politics and the Venn diagram in between.

“I love her approach,” Bershan admits. “What she’s saying is needed to be said. It’s just how you say it to people, right? I learned these tools as a coach. Everybody doesn’t accept things the same. Everybody doesn’t hear things the same, so you have to go to people and approach people in a different way. That’s it. No shade to her. Nothing’s wrong with her. I’m loud. I’m fun. This is how I do. I’m dancing on tables. That’s how I live my life. This is Bershan, real. Eboni’s a lawyer. She’s a journalist. That’s a different personality than me, you know what I mean? So, why do we have to be the same? I don’t know why everyone’s like, ‘Oh, you got…’ No. We just have differences of opinion and we have bumps in the road. We’re good.” 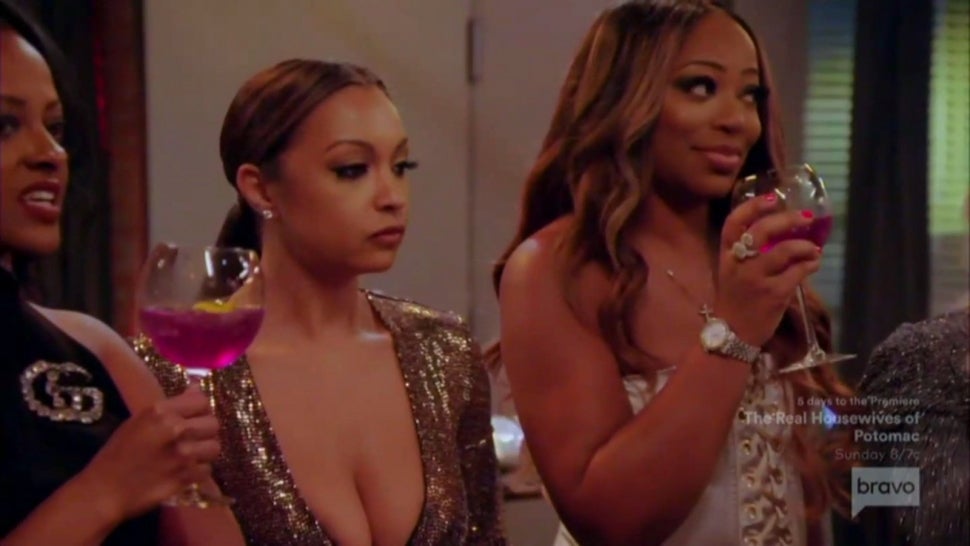 The future of this friend group seems a bit up in the air, if tabloid headlines are to be believed. Report after report claims a major shakeup or recasting will happen ahead of season 14, with the season 13 reunion taping allegedly pushed back. Bershan says she “hopefully” will be in attendance at the taping, but doesn’t yet know. She also doesn’t know if she’ll be back for another season, but seemingly wouldn’t turn down the opportunity. Or, better yet, the chance to hold an apple.

“Never say never,” she says. “I love the girls. I love shooting with them. I love that Bravo and Andy [Cohen] bought in diversity. Kudos to them, because it was needed. It’s New York City. But I do have a lot. I have a book coming out, I have an app coming out, I got a T-shirt line. I mean, I’m doing a lot. I got an interior design business.”

On top of all her work commitments, Bershan also seems to have a lot of personal story to share, should she return for season 14. She let it slip on the most recent episode that she was involved in “a lot of lawsuits,” at least one tied to her desire to have a child from the embryos she froze with her now-ex-husband.

“I had some crazy stuff happen to me,” she admits. “And with lawsuits, I definitely, I want to have a baby. I want to do a surrogate. I’m looking into that right now. And so, I had some embryos lawsuits that, crossing my fingers, if I don’t get them, then it’s the surrogate route, and I’m on my way to surrogacy. But I’m fighting for them. I’m a fighter and I don’t give up. So that’s the journey of Bershan.””

That’s the spirit behind her new app experience, too. Bershan’s new platform, URAWARRIOR (pronounced “You Are a Warrior”) is her way of giving back. It’s a digital coaching service she hopes makes “mental health cool,” connecting users with experts, therapists and survivors of tough life events to show people “you are not alone” when you feel like there’s no light at the end of whatever tunnel you find yourself in. As a two-time cancer survivor, it’s a need Bershan knows all too well.

“I live my best life to the fullest, baby, knowing that I am who I am, Bershan Shaw,” she cracks.