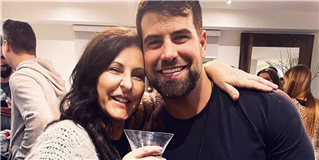 Wondering how Blake Moynes feels about his ex Katie Thurston announcing that she’s dating former Bachelorette contestant John Hersey? Look no further than Blake’s mom, apparently, because she is out here liking pointed comments about their split on Instagram.

According to Us Weekly, Emily Moynes just liked a comment from a fan that reads “Nah this is terrible on Katie’s part. I feel truly sorry for Blake. In any relationship, you put a sense of ‘trust’ in one another, especially long-distance relationships. There’s no denying the dishonesty and deception for months upon months.”

FYI, the comment in question was left on @Bachelornation.scoop’s Instagram re-post of Katie’s “12 Days of Messy” announcement:

Blake, meanwhile, has unfollowed both Katie and John, and is apparently feeling “blindsided.” Fair enough, but as a reminder, he and Katie have been broken up for almost a full month—and even released a joint statement Instagram saying in part, “It is with mutual love and respect that we have decided to go our separate ways” and “both of us will forever want the best for one another.” Plus, there’s no evidence that Katie and John were anything more than friends until recently!

Anyway, John and Katie seem to be doing their thing and enjoying their new relationship despite this unfolding drama, and John just posted this cute moment on TikTok:

Blake hasn’t spoken out himself, but he’s going on Mike Johnson and Bryan Abasolo’s Bachelor Nation podcast so get ready: