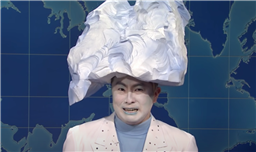 Bowen Yang has made both Emmys and Saturday Night Live history.

The Saturday Night Live freshman, who has made his mark on the long-running sketch comedy show, became the first Chinese American actor to receive an Emmy nomination.  The Television Academy, with the help of Jasmine Cephas Jones and Ron Cephas Jones, revealed the list of 2021 Emmy contenders on Tuesday.

In addition to becoming the first Chinese American male acting nominee, the Nora From Queens actor became the first Saturday Night Live featured player to receive a nomination for the annual television awards show. It’s just the latest mark Yang has left on SNL since joining the cast in 2019, when he became the series’ first-ever Asian cast member.

Throughout his tenure so far, Yang has cemented his place as a source of fresh and unexpected content at Saturday Night Live. The co-host of the Las Culturistas podcast, has gone viral for a number of his sketches and characters including his portrayal as The Iceberg The Sank The Titanic on one Weekend Update segment (watch the clip below).

Yang has also used his SNL platform to take on some of the moment’s most pressing issues. Back in March, the Saturday Night Live cast member addressed the rise in Anti-Asian hate and implored the Studio 8H audience to be better allies to their Asian friends and loved ones and shared resources to support the AAPI community.

The comedian’s nomination adds to the Television Academy’s history of recognizing Asian acting talent. Most recently Sandra Oh became the first Asian actress to gain a lead actress nomination in 2018 for Killing Eve. If Yang were to win his category on at the 73rd annual Primetime Emmy Awards, he would become the third Asian actor to win an Emmy. The first was Archie Panjabi, who took her prize in 2010 for playing Kalinda Sharma on The Good Wife. Riz Ahmed followed in 2017 as the first man of Asian descent to win an acting Emmy.

The 73rd annual Primetime Emmy Awards will air on CBS Sunday, September 19. Cedric the Entertainer will serve as host.