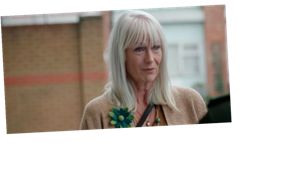 Casualty returned to our screens tonight and fans were shocked to see an EastEnders regular pop up in the BBC medical drama.

Drama ensued as Ruby Spark (Maddy Hill) struggled to cope with the demands of looking after a young baby in tonight's instalment of the long-running hospital series.

She was grieving for Violette and trying to be a good paramedic at the same time.

Her mother Lavender (Sian Webber) came to Holby to help with the baby but she wasn't convinced that Ruby is up to the task of looking after Harmony.

Ruby later lashed out at her mother as she accused her of being partly to blame for Violette's death.

Casualty fans were distracted from the tensions between the mother and daughter as they noticed that Lavender actress Sian Webber also plays Phil Mitchell's layer Ritchie Scott in EastEnders.

Taking to Twitter, one viewer penned: "It’s Ritchie from EastEnders."

A second pointed out: "Is that Ritchie Scott from EastEnders?"

A third said: "Oi, Ritchie from EastEnders in Casualty."

Sian made her first appearance as Ritchie in 2005 and the solicitor was last seen in Albert Square in 2019.

As well as helping the Mitchell clan, Ritchie most recently helped the Carter family free Mick (Danny Dyer) from prison after he was accused of shooting Stuart Highway (Ricky Champ).

Ruby ended up confessing to her mum that she wasn't fit enough to look after her young daughter.

Elsewhere in Holby, Archie (Genesis Lynea) got two job offers and spent most of the episode trying to decide what to do.

Eye specialist Megan Harrison (Emily Woof) wanted Archie to come to Sudan and work alongside her in a clinic, and Archie deciding to leave Holby.

Casualty continues on BBC One next Saturday at 9.20pm