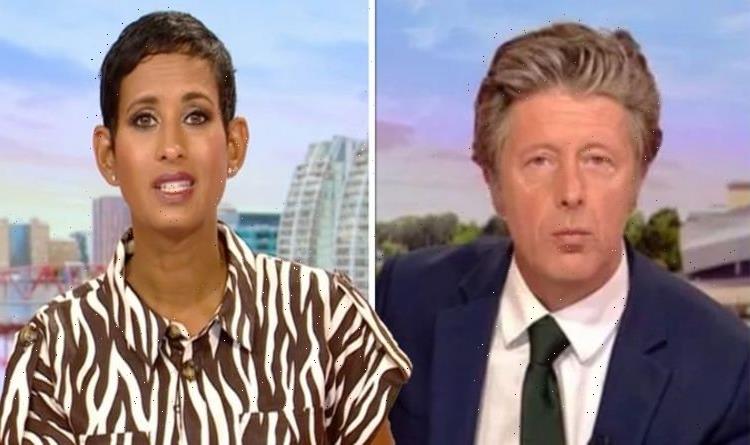 BBC Breakfast presenters can sometimes change at the weekends, but usually viewers see Naga Munchetty and Charlie Stayt present the programme on a Saturday. However, this weekend Charlie was missing from the early morning news show and was instead replaced by Roger Johnson, who joined Naga on the BBC red sofa.

There was no mention as to where Charlie was on Saturday’s episode of the show, but the broadcaster had co-hosted the show alongside Naga on Friday morning.

Naga began: “Our headlines today. The three-year-old girl and her father, just two of the victims in Britain’s worst mass shooting for a decade.”

Roger continued to share details on the story coming out of Plymouth over the past few days: “Jake Davison’s gun and permit were confiscated by police after he was accused of assault, but returned to him weeks before the attack.

“The police watchdog investigates why,” he added.

“Crisis in Afghanistan, the US government warns the Taliban could seize the capital within a month as militants continue to make gains across the country,” Naga continued.

Meanwhile, well-known meteorologist Carol Kirkwood usually presents the weather forecast on the BBC show but was also absent this Saturday.

When Carol is unable to be on the programme at the weekend, popular newcomer Owain Wyn Evans often steps in to give the latest weather news.

However, in recent weeks there’s been a shake-up of the weather presenting line-up during the weekend instalments.

On Saturday, Sarah Keith-Lucas stepped in to inform viewers of the latest updates in the weather forecast.

One viewer questioned: “It is Saturday isn’t it? Why have #BBCBreakfast got the Sunday reserve team and filler material on?”

Meanwhile, others noted that Roger often gets called in to help host the show when other presenters are on holiday.

There’s likely to be more changes to the BBC Breakfast presenting line-up on the horizon as Louise Minchin is soon set to leave the show.

Earlier this summer, the presenter announced that her time on the show would be coming to an end after 20 years.

She made the announcement on the news show itself, telling viewers she had loved her time presenting the programme.

Louise praised the BBC Breakfast team but confessed she’d decided it was time to stop setting her alarm for 3.40am.

The presenter gave a vague leaving date of “some time after the summer”, so her exit from the show could be as early as next month.

The BBC has not yet made an official announcement on Louise’s replacement, so viewers will have to wait and see who steps into her shoes.