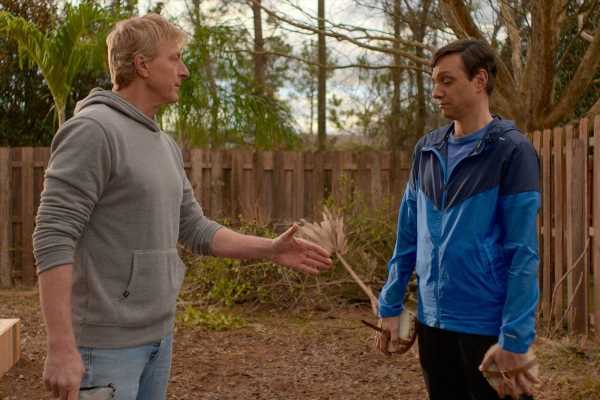 Cobra Kai returned to Netflix just in time to celebrate the new year. The show has earned a loyal fan base in its four seasons. And luckily for them, if the showrunners get their way, the series could go to season 6.

Season 4 of Cobra Kai premiered on Netflix on Dec. 31 with ten new episodes. The series, based on the beloved Karate Kid movies of the ‘80s, picks up with Daniel LaRusso (Ralph Macchio) and Johnny Lawrence (William Zabka) working together to train their students to defeat Cobra Kai.

Netflix renewed Cobra Kai for season 5 in August 2021, which is surprising, considering how few of the streamer’s series make it past their fourth season. And when talking to Collider, showrunners Josh Heald, Jon Hurwitz, and Hayden Schlossberg revealed that they’re working on the new season. But they also suggested they have more than that in mind.

“We still have an endgame plan,” Heald said. “We’re still writing beyond Season 5.”

“We’ve never said from the beginning how many seasons there would be,” Hurwitz added. “I think we always viewed it as at least six was sort of in our heads, but we’re still figuring out exactly what the length for that landing is.”

Cobra Kai has introduced lots of new characters since season 1. And it also brought back a few Karate Kid fan favorites, including Elisabeth Shue’s Alli Mills, Tamlyn Tomita’s Kumiko, and Yuji Okumoto’s Chozen Toguchi. When it comes to mapping out a game plan for the overall story arc, showrunners told Collider that their characters usually drive and sometimes modify their decisions.

“There are characters and storylines that we’ve considered that, from the beginning, we would have said, ‘Okay, that’s a season,’ and that storyline ended up being an episode or two,” Heald explained. “And then there’s the opposite of that where you say, ‘Okay, this is a season,’ and now we’re going to extend that into multiple seasons.”

Heald revealed that the showrunners always look back at their original plan with open eyes. And he said they tend to lean into character arcs when they begin to look interesting.

“With so many new branches and so many new characters and interactions and what you’re seeing during production when, ‘Oh wow, these two people together, there’s something interesting about that duo,’ you want to lean more into it and when you do lean more into it, it naturally pushes other things along and further out,” Heald said.

“[The game plan has] changed at times, but it also hasn’t,” he added. “But it’s been fun to bring in those new characters and storylines and let them lead the way sometimes.”