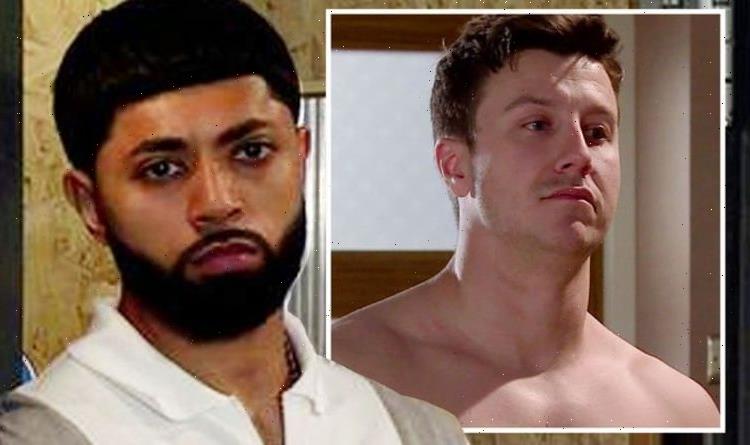 Coronation Street: Zeedan breaks up with Rana in 2016

Ryan (played by Ryan Prescott) has been taking a back seat on Coronation Street of late, after the explosive aftermath of his split from Alya Nazir (Sair Khan) led to him having a brief dalliance with Daisy Midgeley (Charlotte Jordan). The Weatherfield heartthrob hasn’t had a romance since and has been enjoying the single life despite still holding a torch for his ex-girlfriend. However, he could turn to her brother Zeedan (Qasim Akhtar) for comfort on the ITV soap as the two men might find their hatred for one another is actually passion.

The drama kicks off next week when Zeedan’s money troubles continue as his father-in-law Hashim (Vincent Ebrahim) demands the £50,000 back his son in law stole from the family.

When he thinks some money he has collected has gone missing, he has to confess all to Ryan when his sister’s ex-boyfriend starts asking some difficult questions.

Having discovered Zeedan’s secret, the heartthrob tells Alya everything which has happened in the hopes he can get back in her good books.

This leads to a heated confrontation between Hashim and Alya as she tries to help her brother out of the rut he has got himself in.

Unfortunately, the Nazirs generate more problems than solutions as the gangster issues more warnings about the delay in getting his money back.

As the tensions continue to build for the Nazirs, Zeedan could be looking for an escape from the horror his life has become.

Although he has never seen eye to eye with Ryan, the fact he confided in him first about his money troubles could suggest he has a sense of trust in the heartthrob.

Despite Ryan breaking this by telling Alya, Zeedan could still have seen a very different side to his sister’s ex-boyfriend.

The Nazir boy has never shown an interest in men although he has had some experience with gay relationships as his late wife, Rana Habeeb (Bhavna Limbachia) was a lesbian.

He always thought he was only interested in women but could Ryan’s willingness to help him with his financial woes have opened up Zeedan’s heart to seeing his rival in a new light?

Ryan’s the only person he can really turn to

Discussing his character’s latest storyline, the actor who plays Zeedan, Qasim, spoke about why his alter-ego turned to Ryan first.

The soap star said: “There is certainly something in that saying that a problem shared is a problem halved and I think he just tells him because he needs some advice.

“He has been dealing with this situation on his own and Ryan is the only person he can really turn to as he is on to what Zeedan is up to anyway.

“So he might as well confide in him and hope he keeps it to himself,” the actor explained before revealing how Zeedan feels about the heartthrob snitching on him.

Qasim added: “He realises that he has shot himself in the foot, far from helping him Ryan has dropped him right in it.”

“The main reason that Zeedan didn’t tell Alya was less that he was worried about her giving him grief, it was more that he wanted to protect her,” Qasim continued.

“Ultimately he knows that when she found out about it she would want to try and help him and that is exactly what she does.

“And this terrifies him because he wants to protect his sister not have her put in danger trying to help him sort out his mess.”

Zeedan could be looking for a fight with Ryan when he first approaches him over telling Alya but with feelings burning under the surface, this could soon turn to passion.

Ryan has also never shown an interest in men but he could get swept away in the moment and reciprocate Zeedan’s kiss.

With both men technically single, they could share stolen moments as they try to find a way to get Zeedan out of his money troubles.

However, a huge hurdle could be put in the way as in the coming weeks, Zeedan’s estranged wife is going to turn up on the cobbles.

“It is interesting to meet her as he made some terrible mistakes in the marriage and cheated on her but it quickly becomes evident that he still loves her so we will see a different side to Zeedan.

“He was so hurt in his first marriage and for some reason, he then did the same thing to his second wife as Rana did to him.

“So it is great to meet her and learn more about that dynamic,” the soap star continued, adding: “I am intrigued to see where the story is going to go, lots more twists and turns along the way.”

Although Qasim said Zeedan still loves his wife, this could prove to be a huge dilemma with his feelings for Ryan.

Having cheated on Mirrium during his time away from the cobbles, the Nazir boy might not want her to know he has been unfaithful with a man.

He could therefore give Ryan the cold shoulder, leaving the heartthrob confused over whether there is still something between them.

Could Ryan and Zeedan’s romance be over before it’s even begun?

Coronation Street airs Mondays, Wednesdays and Fridays at 7:30pm and 8:30pm on ITV.