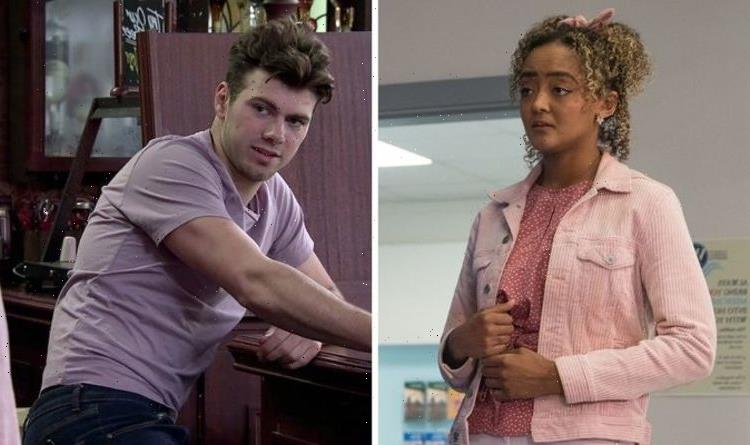 Coronation Street: Curtis tells Emma the truth about his condition

Curtis Delamere (played by Sam Retford) has a life-threatening condition that has seen him die twice. In tonight’s episode on the ITV soap, Emma Brooker (Alexandra Mardell) becomes more and more worried about Curtis after he collapses at the Bistro and has to be rushed to the hospital. In scenes to air next week, Emma decides to confide in Steve McDonald (Simon Gregson) about Curtis failing to turn up to their date. Will Steve be able to talk some sense into Curtis?

In recent weeks, Curtis admitted to Emma that he is living with an incurable heart condition.

His heart had previously stopped beating twice and while he may have a “totally normal lifespan”, it is also possible that his life might be cut short due to the condition.

When doctors urge Curtis to stay in hospital overnight following his alarming collapse, he dismisses their suggestions.

In scenes to air on Monday, Curtis plans to meet up with girlfriend Emma after discharging himself from the hospital.

However, when Curtis fails to meet Emma for a planned date she decides to confide in Steve that she’s worried he might have collapsed again.

But Curtis is actually alone in the Rovers drowning his sorrows in alcohol.

Still concerned about Curtis’ whereabouts, Steve and Emma try to look for him.

They soon find him sitting drunk and alone in the Rovers.

A disappointed Steve then gives Curtis a talking to about messing his daughter around.

Curtis tells Emma how sorry he is and explains that he just wishes the hospital would give him a proper diagnosis as not knowing is driving him mad.

Will she be able to forgive Curtis for letting her down again?

Or will she be able to convince Curtis he needs to get answers from the hospital about his condition?

Earlier in the year, Emma believed Curtis was cheating on her, but in reality, he was meeting with someone from a terminal illness support group.

Curtis told Emma’s dad about his condition which “doctors were baffled by” before revealing the truth to Emma, leaving her to speculate.

When revealing he is living with a terminal illness, he said: “It’s a heart condition.

“I could have a totally normal lifespan or… that’s it. Any time, any place, anywhere, just stop.

“I suppose I’m no different from anyone else in some ways, none of us knows. My heart has stopped a couple of times. In layman’s terms, I was dead.”

He explained: “I’d love to say there was a bright white light and heavenly choirs but nothing. I don’t recall anything until after the medics brought me back around.

“Why burden you with it and Emma? You can’t always get what you want and I’d rather Emma gets what she needs – a clean break. I’d rather she hated me than grieve for me.”

But a supportive Emma made it clear she didn’t want to let Curtis go when she found out the truth.

So will a spiralling Curtis get the help he needs to save his life, and save his relationship?

Coronation Street airs on Mondays, Wednesdays and Fridays on ITV1.