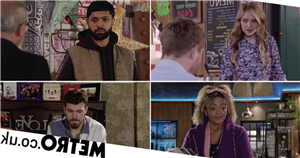 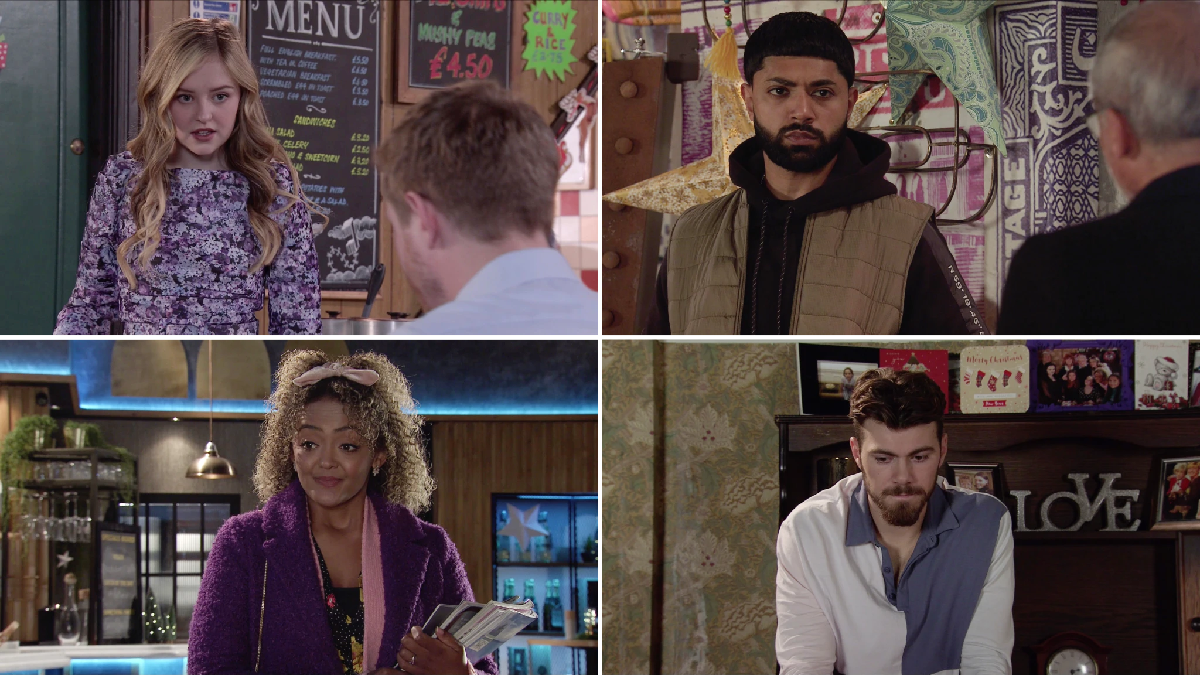 Zeedan Nazir (Qasim Akthar) is playing with fire in Coronation Street as Hashim ups his threats, forcing Zeedan to torch Speed Dahl. But will he be exposed to his family – and will everyone emerge alive?

Elsewhere, oblivious Daniel Osbourne (Rob Mallard) stokes the fires of Summer Spellman’s (Harriet Bibby) growing infatuation with him, which could land him in serious trouble.

And just how long can Curtis (Sam Retford) keep his lies under control as Emma (Alexandra Mardell) meets up with his very much alive dad?

Daniel winds Daisy up by suggesting she’s ill-educated but Daisy takes it to heart and flounces out. In the Rovers, James’s team mate Ashley eyes up Daisy across the bar. Daisy joins Ashley at his table and demands a drink. When Jenny reveals that she left Daisy chatting up Ashley, Daniel masks his jealousy.

Emma and Curtis discuss wedding venues with Debbie. Curtis explains that it’ll be a small wedding as he doesn’t get on with his family and his only mates are abroad.

Grace tells Bernie that Ed and Aggie have bought her a sofa but it’s hers for a knockdown price.

Kelly tells Gary she needs a present for a friend. When Gary refuses to accept any money for it, Kelly refuses his charity and puts it back.

Zeedan tells Ryan the whole story and how he has to follow Hashim’s orders or he’ll get another pasting. Ryan begs him to go to the police, but Zeedan refuses, adamant that Alya and Yasmeen mustn’t find out. As the boys argue, Alya demands to know what’s going on.

When Ryan and Zeedan give nothing away, Alya heads off to work, hurt and suspicious. Despite Zeedan’s pleas, Ryan calls at Speed Daal and tells Alya what her little brother has been up to.

Alya rounds on Zeedan for money laundering and demands Hashim’s number. But Zeedan is adamant she mustn’t get involved.

Zeedan arrives in Speed Daal and is horrified to find Alya confronting Hashim. Alya turns on her brother, accusing him of destroying everything their family has worked so hard for.

when Daisy admits that she still likes Daniel, Jenny reckons it’s only because he’s inherited a house. Daniel overhears but Daisy assures Daniel she was never after his money. Their row escalates until Daisy draws a line and tells him it was nice knowing him.

Curtis confides in Emma that he knows his hospital treatment is going to be expensive, which is another reason to scale back their wedding. Emma tells Steve how she plans to surprise Curtis by secretly inviting his family to the wedding.

Gary and Maria offer Kelly a part-time job at the barbers. Kelly tracks down Stu to thank him for all his help but she’s concerned he’s got a bad cough. Maria hands Kelly the barber shop keys and asks her to open up in the morning for her. Worried about Stu’s health, Kelly tells him to spend the night at the barbers.

Chesney and Gemma arrive home with Aled to find Bernie taking delivery of a new sofa. Aggie eyes the sofa with suspicion.

Aggie confronts Grace over the sofa. Grace admits she sold it as she needed the cash. Furious, Aggie tells her she won’t be babysitting again. Grace meets Bernie for a drink at the Christmas market, leaving Glory home alone.

Yasmeen meets Stu at the soup kitchen and invites him to Speed Daal for a free meal. As Zeedan and Ryan mull over how best to launder all Hashim’s cash to get him off their backs, Alya takes a call from Elaine, who reveals she wants to sell her share in the business.

Putting on a brave face, Daisy tells Jenny that Daniel’s history and she’s accepted an invitation from Ashley for a weekend away. When Daniel confides in Adam that Daisy has dumped him for a footballer, Adam reckons he has dodged a bullet. Summer gives herself a makeover in an attempt to look like Daisy but when Daniel fails to notice, she’s deflated.

When Curtis finds out that Emma has been in touch with his family and invited them to the wedding, he’s not happy.

Emma tells Aggie that Curtis has dropped out of medical school. Aggie quizzes Curtis over his decision but he refuses to discuss it, explaining he’s more concerned with his appointment with the specialist. Leaving Emma in the waiting room, Curtis heads in to see the doctor.

Summer, Asha and Amy make plans for a Christmas ‘ice-ball’. When Summer suggests that Max could make a film about the party he’s thrilled, thinking she wants to spend more time with him.

Curtis tells Emma that although his condition is very serious, the consultant is confident it can be managed.

Back on the street, Neville arrives. When Neville explains that he’s Curtis’s dad, Emma’s gobsmacked, but Curtis quickly covers and makes out that he’s really his stepdad. Neville’s pained to realise Curtis has told Emma he’s dead but goes along with the lie.

Ed urges Aggie to smooth things over with Grace. Finding Grace at the market, Aggie apologises for her comments. Suspecting that Grace has left Glory home alone, a furious Bernie orders her to go and tend to her daughter.

Zeedan reckons they need to up their game with the food van and pitch it at the Christmas market if they’re to buy Elaine out. Zeedan receives a threatening text from Hashim and shows it to Alya and Ryan.

Annoyed that Zeedan beat her to it and secured the last pitch at the Christmas market, Debbie forms a plan. When Zeedan discovers the food van gone, Alya goes to call the police but Zeedan stops her, revealing the van is full of dirty cash.

Hearing about the theft, Hashim tells Zeedan he wants his money and if the only way to get it is to burn down the restaurant and claim on the insurance, so be it.

Zeedan reels but Hashim says it’s that or he’ll burn down Yasmeen’s house. Will Zeedan go through with it?

Aggie’s fuming after finding out about Grace’s behaviour from Bernie. When Grace drops Glory with Michael, Aggie tells Grace they need to talk as she knows she left Glory home alone.

When Phill reveals his boiler has broken, Fiz suggests he moves in for a few days. Phill invites his mum for tea. Posh Mimi swans into the house.

Daniel helps Summer with her homework. As he reads a love poem aloud, Summer listens, spellbound.

As the restaurant is engulfed in flames, Zeedan’s horrified to discover that someone is inside. Did he go through with Hashim’s demands or is someone else responsible?

Alya tears a strip off Zeedan, telling him she’ll never forgive him for the carnage caused.

Aggie threatens to report Grace to social services for child neglect. Grace admits she never wanted a baby and has a shock proposition for Aggie.

Fiz rounds on Phill for failing to warn her how posh his mum is. When Mimi offers to organise a big birthday party for Phill, Fiz is quietly horrified.

When Emma offers to speak to Curtis’ mum, tell her how ill he is and see if she’ll come to their wedding, Curtis snaps.

Daniel offers Summer a lift home from school. As she steps out laughing, they’re both unaware that jealous Max is filming on his camera.