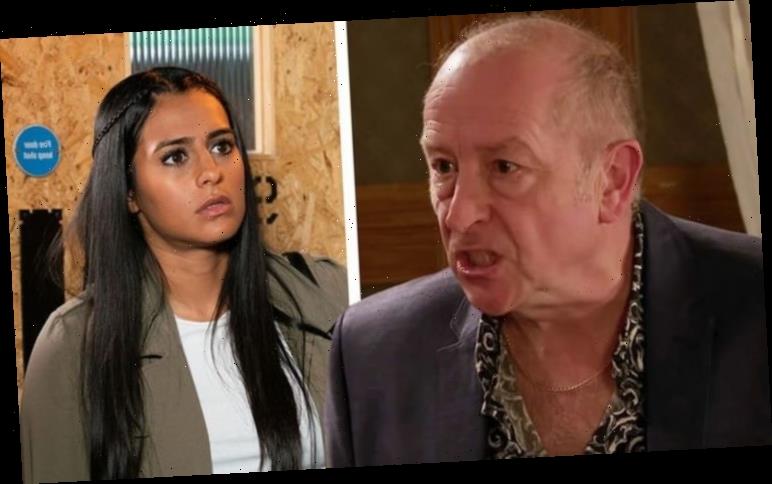 On Friday night, Geoff Metcalfe (played by Ian Bartholomew) stooped to a new low when he brutally killed and roasted Yasmeen Nazir’s (Shelley King) beloved pet chicken, Charlotte Bronte. After realising he perhaps went too far, the manipulative man is going to change tact and target Yasmeen’s granddaughter instead in upcoming scenes of Coronation Street.

For almost a year, Yasmeen has been coercively controlled by Geoff, and week by week his actions have become more and more sinister.

Alya Nazir (Sair Khan) has been wary of Geoff every since he registered interest in his grandmother.

Her suspicions were first raised last summer when Alya lived under the same room and brought back a few friends after a night out.

While they tried to be as quiet as possible, they woke Yasmeen up, and she was thankful for some fresh company away from Geoff. 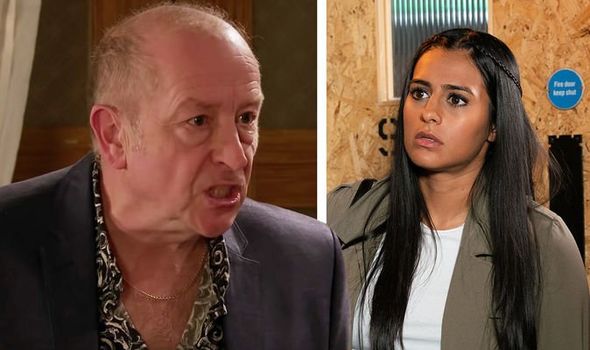 Scenes showed the group sharing a few drinks, but it wasn’t long before Geoff stormed downstairs to see what all the noise was about.

Seeing how much fun Yasmeen was having, Geoff tried to urge her to come back to bed, but Alya, with one too many drinks inside her begged Geoff to let her grandmother stay and have some fun.

It wasn’t long before Geoff called her group of friends “bad news” and then banned her from having anyone over.

Viewers will remember how the episode ended, with some of Yasmeen’s jewellery being stolen and Geoff was quick to blame one of Alda’s friends as the thief. 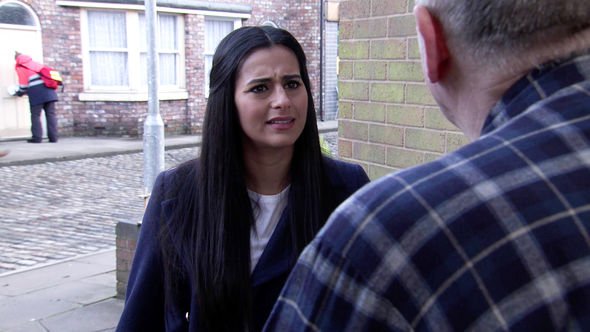 A few months later, Geoff whisked Yasmeen off to Las Vegas for what was initially a holiday, but he managed to persuade Yasmeen they should get married while over there.

Clearly unhappy by the last-minute decision, Yasmeen and Nazir soon clashed, with Yasmeen accusing Alya she was only concerned about her inheritance and not her grandmother’s happiness.

“This isn’t just my home now, it’s Geoff’s too and I would like you to respect that. He’s a very reasonable man. He wants to be your friend,” Yasmeen said but Alya argued: “I’m looking out for you.”

Having been firmly told to keep her nose out of Yasmeen and Geoff’s marriage, Alya has had to take a back seat, but that doesn’t mean she has taken her eye off Geoff.

In recent episodes, Alya left her job at the Bistro and returned to help run Speed Daal, in which she owns a share. 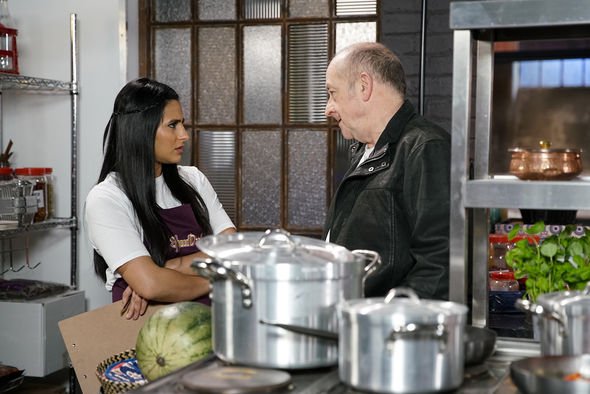 While Yasmeen was delighted by the return of her granddaughter, Geoff pretends to be happy by her arrival.

Viewers then saw Geoff order his wife to clean the house top to bottom and insisted she moved the sofa to give it a good hoover underneath.

But in doing so, she injured her back and this concerned Alya.

To make matters worse, it became clear Alya was being targeted by Geoff when he blamed her for a scathing online review about her customer service in the restaurant – one which he wrote and posted in a bid to get rid of her.

Although Alya tried to discuss the review with Yasmeen, she was quick to defend Geoff and the interests of the restaurants.

And it seems this is the start of Geoff’s new plan to scheme.

In upcoming scenes, viewers will tune in to see Geoff tell Alya it is clear they can’t work together and suggests she sells her share of the business to him and Yasmeen.

Furious with his suggestion, Alya tells him under no circumstances will she not be part of the business, but she doesn’t know the lengths Geoff can go to get what he wants.

He already convinced Yasmeen to make him a partner of the business, will he go behind Alda’s back and forge her signature on the paperwork?

If you or anyone you know has been affected by Yasmeen’s storyline please see Women’s Aid’s website here for help and advice.