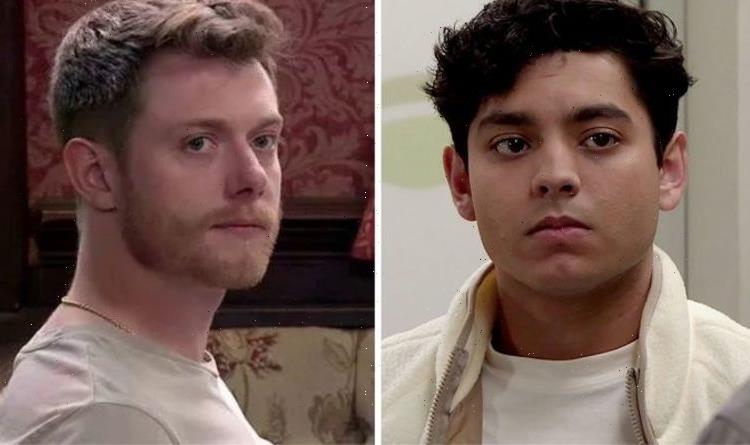 In recent weeks, Coronation Street viewers have watched Summer Spellman (played by Harriet Bibby) as she has grown closer to teacher Daniel Osbourne (Rob Mallard). In scenes that aired on the ITV soap on Monday night, the teenager’s feelings seemed to deepen after she offered to babysit Daniel’s son, Bertie. It is only a matter of time before Summer’s boyfriend, Aadi Alahan (Adam Hussain) realises something is up. But, what lengths will the youngster go to, to get revenge on Daniel?

Recently on the ITV soap, Summer has been working hard as she attempts to get a place at Oxford University.

She’s been receiving extra tuition from Daniel in order to help her prepare, but it seems she may be becoming a bit too attached to the teacher.

During Monday night’s double episode of the ITV soap, Summer offered to babysit for Daniel while he attended Bertie’s parents evening.

In return, the teacher agreed to help Summer prepare for her Oxford interview.

As Daniel returned to the flat, he said: “Sorry I am late, how has he been?”

Delighted at seeing Daniel walk through the door, Summer replied: “We ate 10 carrot batons and we sang Wheels on the Bus about 50 times.”

Summer went on to offer to babysit Bertie whenever Daniel needed. She continued: “He’s such a cutie.

“Whenever you need a babysitter just give me a shout.”

“That is very good to know,” the teacher told her. “Right, what about you?”

“Yeah,” Daniel answered. “I said I’d help you with your interview prep.”

Summer looked delighted that Daniel offered to help her with her interview, as it gives the teenager an excuse to spend more time with him.

As she left his flat, Summer bumped into her boyfriend Aadi, who looked like he had something on his mind.

“Oh, hiya. You looking for me?” Aadi asked his girlfriend.

“I just came out for some fresh air,” Summer replied as Aadi said with disappointment: “Oh, I thought you wanted to hang out.”

“I’d love to but I am up to my eyeballs,” Summer explained.

“I am still prepping my interview,” she continued as Aadi replied: “You certainly put the hours in. You’re going to smash it.”

Aadi explained he was having a tough time with his dad. “He’s doing my head in,” Aadi said.

“Listen if you need any help with the prep let me know because supportive boyfriend is my middle name.”

It is only a matter of time before Aadi discovers Summer’s true feelings for Daniel and after a clash with his dad, the teenager is already looking for an excuse to vent his anger.

Could Aadi claim that Daniel made a move on him or Summer at school in a bid to get him fired?

Summer would be left heartbroken by the devastating lie and Daniel’s life would be ruined.

Viewers have also taken to social media to share their thoughts on the Summer and Daniel storyline.

Oli tweeted: “Will Daisy and Summer have a catfight over Daniel??” (sic)

Ryan penned: “Daniel and Summer are gonna get together. The signs are obvious. I hope not though. Summer and Aadi are good together “

While Mike commented: “The longer this teacher and pupil work with Summer and Daniel will only go one way.. 100% see it.” (sic)

“Summer goes to Oxford/doesn’t go to Oxford – has a fling with Daniel/doesn’t – I don’t care anymore,” Doreen wrote.

Coronation Street airs on Tuesday at 8pm on ITV.