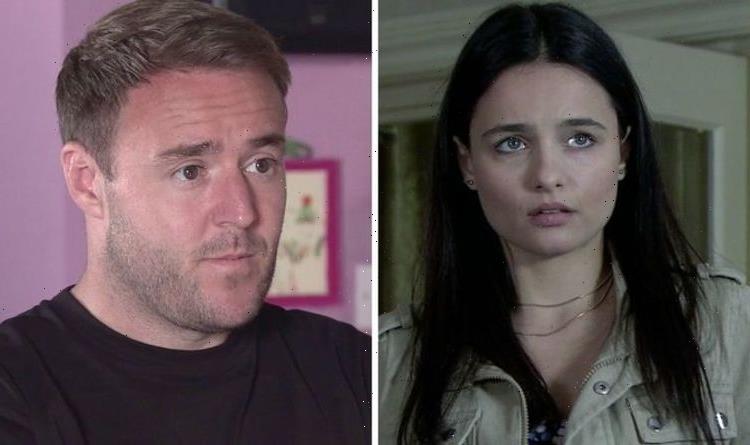 Coronation Street fans have been desperate for Fiz Stape (played by Jennie McAlpine) and Tyrone Dobbs (Alan Halsall) to get back together ever since he walked out and started a romance with Alina Pop (Ruxandra Porojnicu). In recent scenes of the soap, fans have excitedly watched as Tyrone and Fiz have grown closer as they deal with their daughter Hope Stape (Isabella Flanagan) and her dangerous behaviour. The couple have already shared a sneaky kiss, but could Alina end up finding out?

In upcoming scenes in the ITV soap, Tyrone can’t fight his feelings for Fiz anymore and he struggles to get excited about his wedding plans with Alina.

Tyrone’s feelings for Fiz deepen when he sees her crying over a petition to have Hope removed from school.

After hearing what has happened, newcomer Phil (Jamie Kenna) asks Fiz out on a date and suggests they go out for dinner.

However, when Tyrone discovers Phil has asked his ex out, he suddenly becomes jealous.

Unable to contain his jealousy, Tyrone follows Fiz and Phil on their date.

Although, when Phil pops to the toilet, Tyrone takes the opportunity to come clean to Fiz and tells her how he really feels.

But will Fiz be able to forgive Tyrone’s betrayal and take him back?

Elsewhere, Tyrone breaks the news to Alina that he can’t go to Romania on holiday because Fiz is thinking of moving away with their kids.

Fiz also has more trouble with Hope when her daughter refuses to go to school.

Despite Alina’s fears about Fiz, she hopes when she and Tyrone get married things will get better.

However, Hope still won’t accept Alina in their life after she came between her mum and dad,

Hope, who started the fire at Alina’s flat, makes things worse after she pulls a damaged teddy bear from her bag.

She goes on to admit she stole the bear and apologises for the fire. It is only then Alina realises Hope has started more than one fire.

Meanwhile, Fiz tells Phil about her kiss with Tyrone, however, it makes her realise she no longer has feelings for her ex.

Heartbroken Alina has had enough and decides to leave Tyrone and heads off to the airport.

Tyrone manages to stop Alina before she flies back home although she tells him it is over between them.

Discussing her latest storyline, the actress who plays Alina said her character is devastated after Tyrone tells her he wants to get back with Fiz.

She began: “She’s totally devastated because she was trying so hard to make this work.

“However, somehow, she is not surprised, as deep down she knows that Tyrone’s connection with Fiz is very powerful.

“I think she felt it coming but she didn’t want to accept it till the last minute when he actually said it.”

She continued: “When Alina sees that Tyrone followed her at the hotel, she still has a glimmer of hope that he wants her to stay but soon she realises it’s not for the right reasons.

“I guess they both know it’s over, but Alina has more courage and steps up to end it.

“She is being true to herself and she is very strong despite losing what she really wanted.”

With his relationship in tatters, will Tyrone convince Alina to come back to Weatherfield to work on their relationship?

And if she does come back, could Tyrone end up homeless after Alina find out about his secret kiss with Fiz?