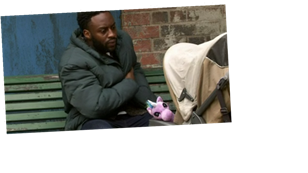 Coronation Street viewers were quick to point out a "blunder" as Michael Bailey "kidnapped" baby Tianna in dramatic scenes.

The character's girlfriend Grace Vickers told him earlier this week that she was moving to Spain, and taking their daughter with her.

Michael was desperate to stop Grace leaving with his child, and so he took the little one and hid from Grace.

However, viewers noticed a "gaffe" as he was only hiding "around the corner".

One said: "LOL he is literally down the road."

While another wrote: "Of all the places he could hide in Manchester he chooses the park outside his house."

A third added: "Up the road from your house is hardly the best hiding place in the world."

"That's right Michael – she'll never find you 50m round the corner from your house… #Corrie", penned another.

Later on in the episode, Michael was persuaded by his dad to come back to the house, but Grace had already called the police.

They showed up and told Michael that they were arresting him "for child abduction".

Viewers were perplexed as the father got into the police car, leaving baby Tianna with his confused dad.

One said: "Well that's BS! They would not arrest him for child abduction! He is her father. Civil matter the police don't get involved! #Corrie".