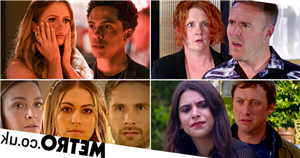 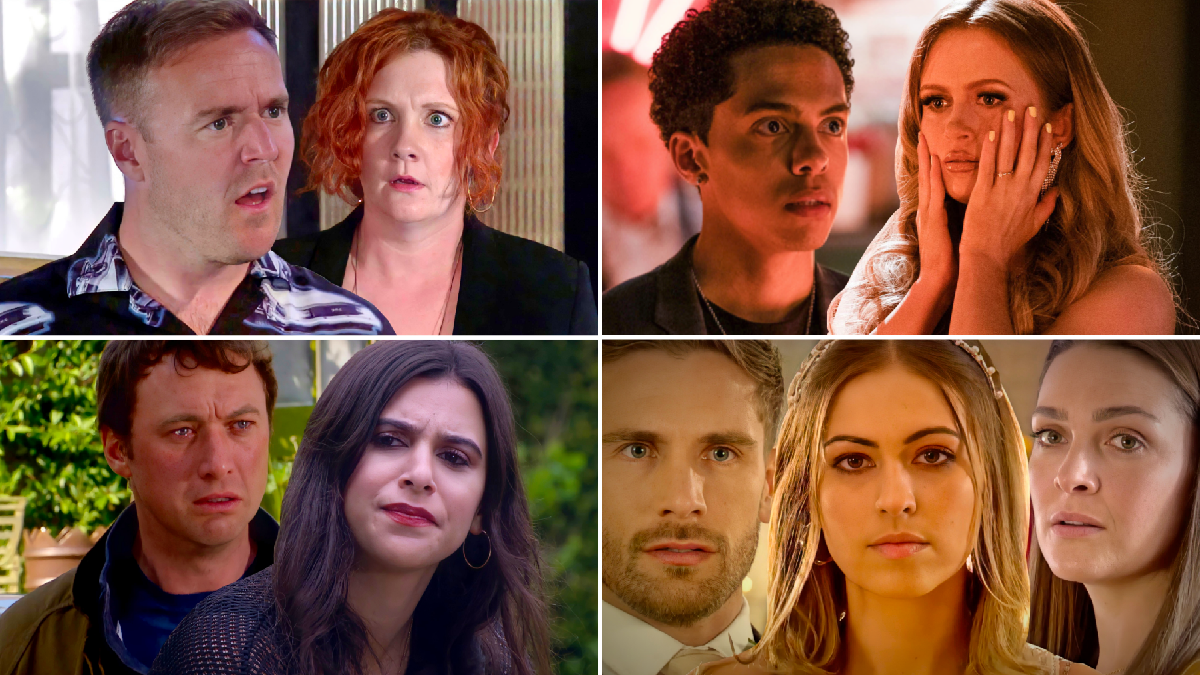 There are violent outbursts, revenge schemes and shocking revelations aplenty in the land of soap next week!

It’s all pretty unmissable stuff, if we’re being honest.

Summer Ranger’s hellish revenge on Brody Hudson kicked off last night in Hollyoaks, but if you think you’ve seen it all, you’re massively mistaken, as next week, things take an incredibly dark turn, as the schemer goes to a whole new level.

And she’s not the only devilish dame plotting in soapland either, as Meena Jutla worms her way into grieving Liam Cavanagh’s good books in Emmerdale, painting herself as the hero once again, which causes something of an altercation.

Altercations are rife in Coronation Street too, as Tyrone Dobbs gets into a violent fight with Fiz Stape’s new beau Phill.

And EastEnders sees Tiffany Butcher make a shocking discovery, as she develops a noticeable rash on her face, in the wake of her facial and fillers decision.

Coronation Street and Emmerdale have ditched the box-set format following the final of Euro 2020, manning you’ll have to catch them nightly.

EastEnders, however, continues to stream each and every Monday on iPlayer until the end of the Tokyo 2020 olympics, meaning that you’ll be able to binge all of next week’s action in one go!

Hollyoaks, meanwhile, will air as usual on Channel 4 and E4 respectively.

1. Nick is over the moon when Natasha asks if Sam can stay with him for the week. Sam, similarly happy, wastes little time in putting up his astronomy posters in the bedroom, but he is later worried that he’s upset Leanne. Nick suggests he remove the posters, but Leanne won’t hear of it, reiterating that she wants him to feel welcome. Sam, touched, gives her a hug. Afterwards, Sam wanders onto the balcony, with his headphones clamped to his ears. Nick, unable to find his son, jumps to conclusions, and comes to believe that he’s missing.

2. Kevin drops his rob for the naked photoshoot, as Brian sets up his camera for the photoshoot in the garage, but little does he know that Abi has shown up! Abi is, of course, stunned to be faced with Kevin, who is completely naked. And it’s not just Kev getting his kit off, as Dev does so too, just as Debbie enters the shop!

3. Curtis receives a phone call and makes a swift exit, which he claims is in relation to a dentist appointment. Debbie, however, reckons she saw him at the bistro with a young woman. Steve, desperate to find out what’s going on, confronts Curtis, who later breaks up with Emma! The young man later come clean to Steve, revealing a huge secret in the process, but just what is he hiding?

4. Fiz hits it off with a bloke named Phill, and Tyrone is put out when he catches the two of them having a meal together. With things having gone quite well, Fiz asks her ex to look after the girls so that she can go on a second date, but he refuses, claiming he’s taking Alina out for dinner. After getting wind that Fiz will be there with her new fella, he takes Alina to the Bistro, but when he attempts to pay the bill, his card is declined, just as he’s making snide remarks at Fiz! Phill, being the bigger person, pays Tyrone’s bill, but Tyrone is not very pleased, and lashes out, taking a drunken swing at Phill!

5. Laura pays Kelly a visit in prison, and quizzes her about the night of Seb’s attack. Desperate for some information, she asks her daughter if she can remember anything at all, assuring her that she can be honest with her. Kelly opens up, admitting that she’s suffering from flashbacks. Laura, therefore, sets in motion a meeting with a journalist named Chris, as they rendezvous at the empty factory. The schemer then asks Chris if she’d be interested in doing a piece on Kelly, asking how much she’d be willing to pay for such an article.

6. Billy is troubled over the theft of the heat pump, and matters are made worse when Ed tells him the insurance will not pay out for stolen item! The vicar’s day then goes from bad to worse when he meets with the bishop to discuss the theft, and he’s told that he’s not up to the job, and should resign! Todd is horrified when he learns of such a thing, as is Summer, who has a go at Paul.

7. Over dinner, James opens up, revealing that a leading gay magazine have approached him, wanting an interview. Michael, Grace and Danny, naturally, are delighted for him.

8. Callum acquires the details of Simon Atmore, the man responsible for Paul’s murder. He realises that Ben is agitated, and refrains from giving his beau the information. Ben, however, later finds the piece of paper with the deets, and sets in motion a plan to meet with this Simon. Callum pleads with Ben to rationalise, but Ben makes it clear he’ll do anything to get revenge. Callum, desperate, asks Phil for help, telling him he’s got the number of Paul’s killer. Phil, however, tells Callum to sort it on his own. Simon, meanwhile, waits for his probation officer, but realises something is wrong, as he steps back into the alley.

9. Frankie’s driving lessons commence, but she’s filled with nerves after Mick suggests places to go. Mick, meanwhile, tells her the paternity of Linda’s baby, and later, he lets Linda know that he’s let Frankie in on their secret.

10. Bernie receives more diet pills from Tiffany. They’re dangerous especially if she is pregnant. Tiffany, desperate to help, suggests Bernie take a pregnancy test to find out if she is pregnant, and she even buys the test herself. Rainie wants to be there when the test is done. However, Keegan assumes the pregnancy test is for Tiffany, forcing Bernie to blurt out the truth to her brother!

11. The Panesars are devastated, as the day they say goodbye to Jags arrives. Kheerat, overwhelmed, walks out. Suki is overcome with grief, while Ash tracks down Kheerat, who is struggling with his emotions. Honey pays Suki a visit, and offers her some words of encouragement. Suki, however, is not too pleased with Kheerat, and she berates him for missing Jags’ funeral.

12. Lola makes Isaac a playlist, and Patrick and Kim encourage her to visit him any the mental health unit, in spite of what Sheree thinks. Isaac, meanwhile, is struggling with the new medication. Lola attempts to comfort him, but Isaac makes it clear that he’s upset because she had previously promised she wouldn’t let him get hurt. Later in the week, Isaac reveals he doesn’t want to see Lola, but Lola is refusing to give up.

13. Dana, Kathy and Peter plan a party for Bobby’s 18th, which Bobby thinks they’ve forgotten about. A man enters the restaurant, and they all jump out to surprise him, but its not Bobby. It’s Harvey: Dana’s dad!

14. Tiffany tells Keegan she is getting a facial. Keegan, meanwhile, wins the Best Street Food Award award, just as Tiffany enters the club, with a disturbing rash on her cheek. Keegan tells her about how her face looks, and she is mortified, insisting she leaves in order to allow Keegan to enjoy his night.

15. Liam has gone missing in the wake of Leanna’s death, but with David concerned for Leyla’s wellbeing, Meena is soon getting fed up. Therefore, she resolves to find Liam herself, and she succeeds, locating him outside the crematorium. She feigns emotion, and suggests that he clear out his daughter’s belongings given that he’s struggling to escape the memories. Her plan works, as she returns to the village with Liam in tow, and enjoys playing the hero. Leyla, however, is seething with Meena’s idea to dispose of Leanna’s belongings.

16. Jacob berates Liam for getting rid of Leanna’s stuff, and accusations fly between the two. Leyla offers to leave Liam alone, but he wants her to stay. Jacob, meanwhile, wants to help with the funeral arrangements, but Leyla’s not sure that’s a good idea. She ultimately agrees to let him assist, but only as long as they keep it a secret from Liam.

17. Nicola confides in Laurel about how she fears her marriage is over. Laurel offers her a sexy dress for the evening, and suggests she fight for Jimmy. Nicola does just that, as she sets in motion a romantic meal, but will it have the desired effect? That remains to be seen, but the following day, Jimmy organises a candlelit meal, and they bond over past memories. But will Jimmy come clean about his kiss with Mandy?

18. David makes a comment about Faith, Brenda and Eric’s unusual living arrangements, and Mackenzie overhears, and proceeds to make some coded remarks of his own. Brenda later pulls a muscle while lifting some boxes, and Faith gives her a massage. Mackenzie arrives, and overhears some intriguing conversations between the two women! Sarah, however, later catches Faith talking about death, and asks her if her cancer has come back.

19. Victoria confirms that Robert has decided not to appeal his conviction, but promises Aaron to always be there for her.

20. Ben is not being truthful with Aaron about his life, and soon enough, everything becomes clear.

21. Brody is left in turmoil in the wake of Summer’s shocking revelation that she slept with Sienna. And his suffering is far from over, as a shocking new accusation is brought to light, leaving even Sienna in shock!

22. Summer takes her revenge to whole new extremes in the wake of the wedding, but she soon has to think on her feet when an innocent bystander is caught up in the crossfire of her scheming!

23. Nancy takes a trip down memory lane with Darren, but it seemingly has the opposite effect, as she ends up questioning if she should’ve forgiven her beau as easily as she did. Darren seeks advice from the most unlikeliest of sources, as he has a chat with Trish, who tells him to live in the present. The legend therefore comes up with an idea, as he draws up a contract, promising to never hurt Nancy ever again!

24. Leah fractures her ankle. Sid signs her up for the Game Of Assasins charity game, but Leah’s got more important things on her mind, telling Trish that she can still compete in the dance competition! But she struggles, and fumbles her dance routine. Trish, fed up, devises a plan to leave her behind, instructing Leah to take a break to catch her assassins target, which she claims she spotted in the woods. Leah sets off, but little does she know that the team have left without her! Sid, meanwhile, realises that Leah is missing.

25. Romeo and Yazz’s ideas on the Game of Assassins continue clashing with Tom’s rules. They don’t care though, as they play the game their way!