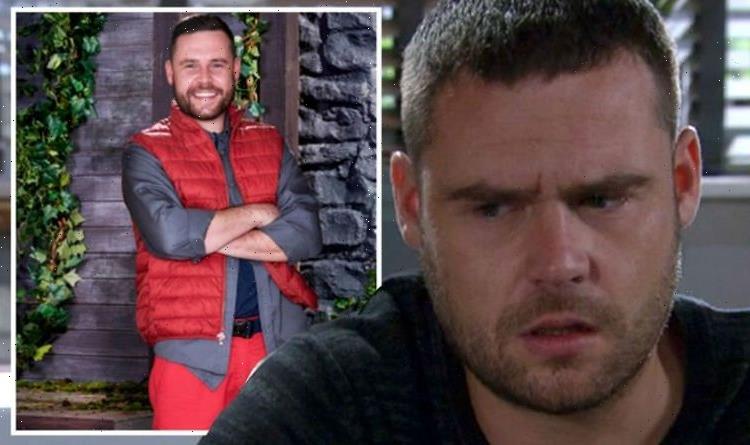 Danny is just one of 10 celebrities who have been announced for I’m A Celebrity…Get Me Out Of Here! 2021, which will once again take place in Wales as the coronavirus pandemic continues to cause issues for the television industry. This is the first reality television programme the Emmerdale actor has taken part in but he is not the first star of the ITV soap to participate as his on-screen mother Lucy Pargeter is a former contestant. However, it seems venturing into the grounds of the medieval castle has got the actor rather rattled as he temporarily leaves his soap role for a new and very different one.

The actor is making a huge sacrifice by taking part in the show as he and his fiancée Steph Jones had welcomed their first child together only last month.

Taking a break from two massive roles in his life is terrifying for the soap star but he will want to throw himself into everything.

He has admitted he will be shoulder to cry on for anyone who might be struggling in camp but his biggest challenge will come in the eating trials.

Discussing his opinion on the Bushtucker Trials, the Emmerdale actor said: “I am sh*t scared of the eating Trials!”

“I can’t even brush my teeth without being sick and I am dreading it if my gagging reflexes start, but that said, it won’t stop me doing the Trials!”

“Will I scream? I think it will be more of a yelp than a high pitch scream,” the actor explained in an interview prior to settling into his new role.

“It is going to be tough and I am also just hoping I don’t pass out if I have to do a coffin trial either,” he added.

Danny is best known for playing Aaron Dingle on Emmerdale for the past 13 years and he has featured in a number of high-profile storylines.

His character has had to come to terms with his sexuality, the fact his father sexually abused him as a child and his sister’s descent into alcoholism.

Aaron has also become one of the show’s most adored heartthrobs thanks to his relationship with former villager, Robert Sugden (played by Ryan Hawley).

I am sh*t scared

However, leaving his role on Emmerdale behind temporarily will be a lot easier for the new father than leaving his partner and baby behind for several weeks.

Talking about coming around to the decision to take part, Danny explained: “Steph and I had a long discussion about me taking part in I’m A Celebrity.”

“We were due to start IVF earlier this year and that would have meant the baby would have been due next March, so it wouldn’t have mattered.

“But then a miracle happened and Steph fell pregnant (without IVF). I knew my baby would only be about a month old when I went into the Castle.

“I was worried about leaving the baby with Steph on her own but she is a midwife and I know our baby will be in perfect hands.”

Danny continues: “She has been incredibly supportive and she knows what a great opportunity this is to take part.

“And so after lots of discussions, I’ve said yes! I’m A Celebrity is the biggest show in the country and I want to show people what I am like as Danny rather than as Aaron.

“It will be nice for people to see me not crying but having a laugh! I am a fun guy at home and I’ve been known as Aaron now for 13 years.

“It’s good to step outside your comfort zone,” he continued but viewers will have to wait and see if he can take the crown in the coming weeks.

Alongside Danny, there are nine other celebrities taking part including Good Morning Britain presenter, Richard Madeley.

Music producer and collaborator Naughty Boy is going to be heading into the castle as well as pop star and Loose Women panellist, Frankie Bridge.

Footballer David Ginola has signed on the dotted line to be a contestant and so has Radio presenter, Snoochie Shy.

Paralympian Kadeena Cox is also one of the famous faces on the line-up and so is former Strictly Come Dancing judge, Arlene Phillips.

It is likely more surprise celebrities will be brought into the fold later on in the competition.

I’m A Celebrity…Get Me Out Of Here! starts Sunday at 9pm on ITV.