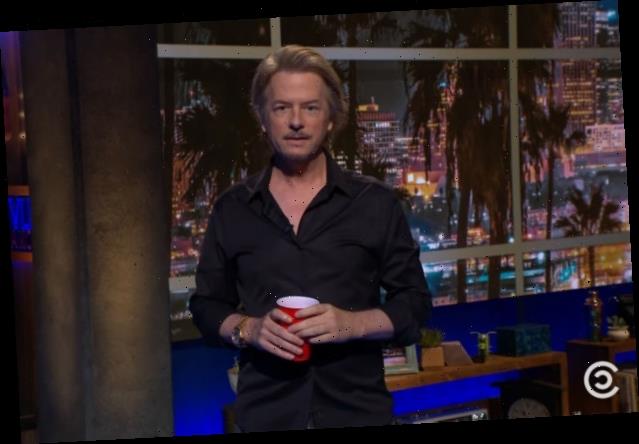 Jimmy Kimmel says he’s “been trying to figure out what we’re gonna do” for “Jimmy Kimmel Live!”

David Spade told Jimmy Kimmel on Wednesday that his Comedy Central series “Lights Out” will be the first of the west coast late-night talk shows to forgo a live studio audience over coronavirus fears.

The news came out while Spade was lamenting the unforeseeable challenges of doing a nightly comedy show, which is new for the “Saturday Night Live” and “Just Shoot Me” alum.

Spade: “And the new thing is no crowd.”

Kimmel: “Oh yeah, you guys are not going to have an audience starting on Monday.”

The following quotes were all Spade who fluctuated from earnestness to jokes, and then back to earnestness:

“I don’t know what to do. It’ll be my manager with his two dogs.”

Kimmel: “I’ve been trying to figure out what we’re gonna do, and you’re like ‘Oh, maybe we shouldn’t have people all in a room together,’ and then you go to Target and there’s 8,000 people in there and you’re like, ‘Well, what’s the point of this?’”

Watch the video above. This part of the couch segment begins at the 7-minute, 48-second mark.

Reps for Comedy Central did not immediately respond to TheWrap’s request for details on the “Lights Out” change.

On Wednesday, “Full Frontal With Samantha Bee” was the first late-night talk show to go without a live studio audience. Find her monologue here.

The rest of the New York-based late-night talk shows, like “The Tonight Show Starring Jimmy Fallon” and “The Late Show With Stephen Colbert,” are waiting until next week to tape without fans in attendance.

At the time of this writing, with the exception of Spade’s announcement, all other west-coast late-night talk shows are currently status quo in terms of live studio-audience plans. TheWrap expects more changes soon.

20 Virus Outbreak Movies, From 'The Seventh Seal' to 'Contagion' (Photos)

We’re not saying this is inspired by recent events that fill us with terror and insomnia, but we are saying that if you happen to relate to that feeling, here’s a list of very cathartic movies about virus outbreaks to get you through it. Whether you want realism, fantasy, horror or maybe computer stuff, we have you covered. Feel free to take a personal day and not leave the house while you watch. And, before you ask: This whole gallery could have been nothing but zombie movies, so we decided to limit things to just Zombie movies that make the disease aspect front and center.