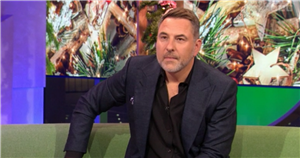 The One Show fans slammed David Walliams' "disgusting" behaviour with his dog on Thursday's episode (May 5) – as viewers claimed he'd become too friendly with his beloved pet Ernie.

The 50-year-old Britain's Got Talent judge, appeared on the BBC programme to promote his new children's book – The World's Worst Pets.

In keeping with the animal theme, David decided he'd introduce his two border terriers – Bert and Ernie – to viewers at home.

Speaking about his upcoming publication, he told host Ronan Keating: "I've got two border terriers – Bert and Ernie – and they're really well behaved."

David proudly added: "He couldn't really be in it because he's so good."

At one point during the discussion, the TV star and comedian scooped up his pooch Ernie and began to stroke his tummy, which seemed to put some Twitter fans off of their tea.

A second seemed to agree as they asked: "Why is David Walliams doing that to his dog on #TheOneShow?"

"What is David Walliams doing to that dog? #TheOneShow," a third online user wanted to know the same.

In spite of the backlash, others seemed to disagree and were loving the fact the Little Britain star had included his own pets.

One comment read: "David William’s Dog is the real star of The One Show tonight. #theOneShow."

While a second chimed: "I'm just here for that dog #TheOneShow," as a third said: "@davidwalliams dog is absolutely adorable. So relaxed and well behaved #dogs #dogsoftwitter #TheOneShow."

Meanwhile, David has recently returned to his judging post of the popular talent scout programme BGT.

The ITV show was given the axe by ITV chiefs last year after they'd struggled to bring the show to life with the restrictions that were in place.

With much anticipation for the Saturday night favourite to return, it certainly hasn't disappointed so far.

More recently on the show, there wasn't a dry eye in the audience after disabled dance group Born To Perform stole the hearts of everyone across the nation.

They performed to Hairspray's You Can't Stop The Beat and were heaped praise by the judging panel that includes David, Simon Cowell, Amanda Holden and Alesha Dixon.

But it was David, who had been most touched by their incredible performance and without hesitation the comedian slapped the golden buzzer before him – popping the act straight through to live auditions.