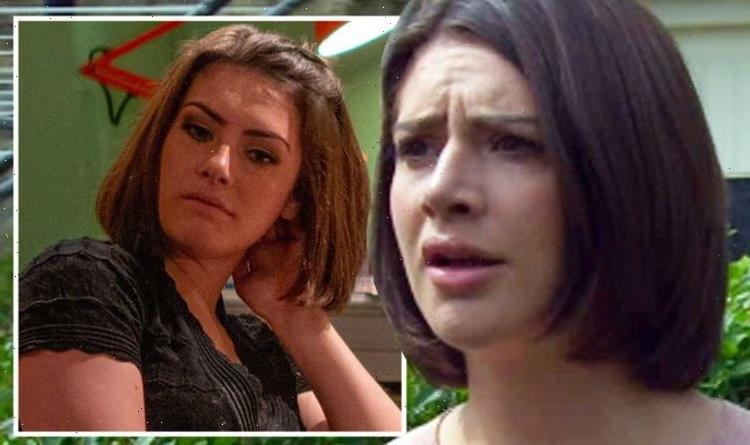 Victoria (played by Isabel Hodgins) is one of Emmerdale’s most beloved characters and she has been at the centre of some of the ITV soap’s most hard-hitting storylines. Following the exit of her boyfriend, Luke Posner (Max Parker), his father and Wendy Posner’s (Susan Cookson) ex-husband has arrived in the village to stir up trouble. However, when a gun is brought into the drama, it seems one life will be lost in the shooting but will Victoria be the unlucky victim?

Will Victoria Sugden die on Emmerdale?

In Wednesday night’s episode of the weeknight serial drama, Victoria and Wendy ended up being held at gunpoint by Russ Posner (Rob Jarvis).

The reason he has caused such a calamity is because he wants the money his mother left to his grandson and Victoria’s son, Harry, in the will.

With £50,000 at stake, Russ has become less and less patient in recent scenes, leading to him arriving at The Hide with a gun.

This isn’t the first time the character has used a weapon as he explained earlier this week he is on the run after shooting a police officer in an armed robbery.

Therefore, he is no afraid to pull the trigger again and this time, it could be Victoria who is the recipient of the bullet.

It has been confirmed by spoiler stories one villager will end up being shot and Victoria is the prime suspect.

As Harry’s mother, Russ was holding the gun at her and demanding she transfer the £50,000 so he can evade police capture.

If she refuses to help her son’s grandfather, he could launch a bullet at her which could prove to be fatal.

When David Metcalfe (Matthew Wolfenden) discovers the woman who he has a crush on is in danger, he tries to save the day.

However, this could make things even deadlier as Victoria could jump in front of the gun to ensure her love interest isn’t harmed.

Having been a character on the show for 27 years, bosses could be writing Victoria out of the show in a dramatic fashion.

The actress who plays the beloved character, Isabel, has spoken out on whether her character will meet the grim reaper.

Isabel explained: “You hear a gunshot, there’s a mad man at large. The [viewers and villagers] should fear the worst.

“Victoria has got so much to live for and for that to possibly be taken away from her is awful,” she continued.

Even though her death has not been confirmed, it would make the most amount of impact if she were to be killed off.

At the prospect of making an exit, Isabel added: “If it was one’s time [to leave] it would be bittersweet.

“Because you’d be gutted to be leaving but also thinking this is so juicy and it’s going to be great,” she told The Mirror.

The actress who plays Wendy, Susan, also addressed the deadly situation her character and Victoria have been dragged into.

She said: “It is a really scary situation and he [Russ] is terrifying, and there’s no pleading to his better nature.

“Because he’s like a cornered animal, and at any point it feels like it’s a case of, if he’s’ going to go down, he is taking us with him.”

Fans on Twitter have been sharing their thoughts about Victoria’s possible death, with one writing: “If Victoria and Wendy’s fate lies in the hands of David, then they are both screwed! #Emmerdale.”

Another added: “Word to the wise Russ. Shooting Victoria won’t bring you funds…rather a big fat prison cell #Emmerdale,” whilst a third remarked: “Signing your own death warrant there Victoria #Emmerdale.”

It has not been revealed in spoilers for next week’s episodes whether or not Victoria survives the ordeal.

There is no mention of Victoria, Wendy or Russ, or the events of Thursday night’s episodes, making it impossible to know the aftermath of the shooting.

Victoria’s best friend, Matty Barton (Ash Palmisciano), is mentioned although there is no indication if he is upset about her death.

Emmerdale airs weekdays at 7pm on ITV with an extra episode on Thursdays at 8pm.