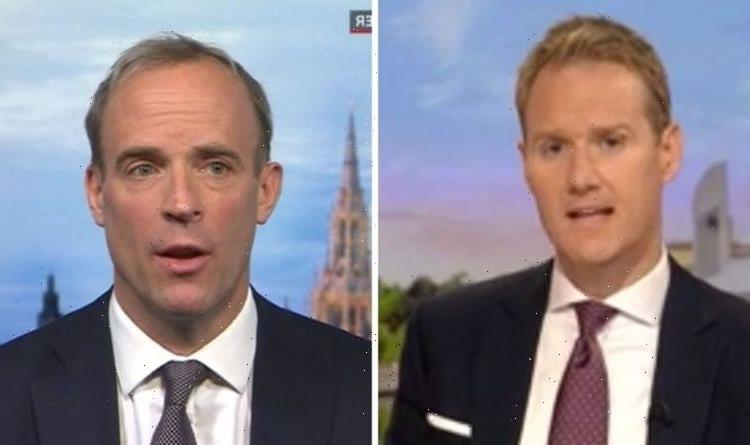 Raab grilled on ‘campaign to get you out of the job’

BBC Breakfast presenter Dan Walker told Foreign Secretary Dominic Raab a government source told The Times newspaper he “is toast” in the new Government reshuffle. However, Mr Raab, who has come under fire in recent weeks over the Afghanistan crisis, shut down the claims which he labeled as “ridiculous” and “lacking in credibility”.

The presenter directly addressed Mr Raab about the speculation “which has been going around over the last couple of weeks and days”, that the Foreign Secretary’s future has been thrown into doubt.

Mr Raab has been accused of leaving 1,000 refugees behind in Afghanistan who “could have been saved if he had worked with his counterparts”.

During the interview, Mr Walker told Mr Raab: “There was one Government source which told The Times newspaper, ‘I think Mr Raab is toast in the new reshuffle and the foreign office is an appallingly lead organisation with a control freak in charge who won’t delegate anything.’

“I know that is probably hard for you to hear this morning but how do you respond to that?”

Mr Raab replied: “It’s just ridiculous. Anyone taking time out during the evacuation to go and brief anonymously newspapers with a totally inaccurate skewed set of reporting I’m afraid lacks any credibility and is probably engaged in buck-passing themselves.”

He went on to explain from April, right until the evacuation, the government has done everything it possibly can.

Defending himself and his department, Mr Raab added: “I can tell you just to give you one illustration, the MP hotline at the peak has calls being answered in under a minute.

“We have worked with all of the teams across the government to secure over 17,000 out of Afghanistan since April and I am proud of the job my team has done.”

He explained the work has been a team effort among the forces on the ground in Afghanistan as well as the Home Office teams.

“I think history will judge 17,000 people being given safe passages without precedent is a great job across government in very difficult circumstances, but no department has done better than the Foreign Office,” he added.

“And frankly anyone trying to pass the buck with anonymous briefings I think has very little credibility.”

Mr Raab continued defending his position and the work of his department to the BBC Breakfast host.

However, Mr Walker highlighted how Mr Raab admitted last week on the show that, in hindsight, he would not have gone on a recent holiday to Crete, in Greece.

The presenter told Mr Raab some serious points have been made about his position, with people talking about the Foreign Secretary referring to Afghanistan as “yesterday’s war”.

Mr Walker asked Mr Raab if there is a campaign to get him “out of a job”.

Raab smirked and replied: “Politics is a rough game and all I can tell you is anyone going around briefing newspapers – and of course August is known as the silly season for this kind of stuff – they aren’t either peripheral figures or frankly they lack credibility and they should be focused at the job in hand.”

Viewer took to Twitter to voice their opinions of Mr Raab’s future and slam the BBC Breakfast interview with one user tweeting: “Despite Tory MPs claiming Dominic Raab is the most hardworking minister and a workaholic when interviewed he’s clearly not across his brief.

“He gets more puce the more he stumbles around searching for an answer #BBCBreakfast.”

Another tweeted: “What was that about taking time out during a crisis? Err, Crete? #bbcbreakfast.”

“Raab ‘Anyone taking time out during the evacuation and ‘crisis’ to go to the papers,'” a third posted.

“What about anyone taking time out to go on holiday ‘during the evacuation and ‘crisis’?#BBCBreakfast.”

BBC Breakfast airs weekdays on BBC One from 6am.