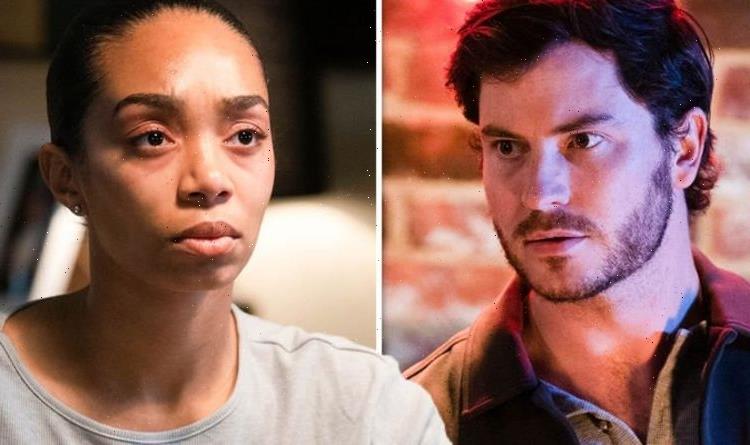 Chelsea Fox (played by Zaraah Abrahams) has not been coping well with married life after finding out Gray Atkins (Toby-Alexander Smith) murdered his first wife Chantelle Atkins (Jessica Plumber) in EastEnders. Whitney Dean (Shona McGarty) and Kheerat Panesar (Jaz Deol) promised to help the mum-of-one but will they be able to stop Gray from harming his new wife?

In upcoming scenes, Chelsea continues to find ways to try and avoid Gray.

The disgraced lawyer suggests they should register Jordan’s birth.

Chelsea opens up to Whitney and Kheerat explaining her fears about her current living arrangement.

They encourage her to stick to the plan of waiting for the lawyer to slip up.

However, Whitney notices Chelsea is struggling to cope and asks her if something in particular is bothering her.

The new mum explains if Gray is registered as Jordan’s father she’ll never get rid of him even if he’s imprisoned.

Whitney suggests they find a way to get Chelsea to sign the birth certificate without Gray.

Later, Gray tells his wife Jordan is breathing on his own and they no longer have to be at the hospital 24/7.

Chelsea’s thrilled for her son but realises this makes her chances of getting hold of passport so she can register Jordan’s birth slim.

She tells Kheerat she can’t leave the house so he distracts Gray by taking him to The Queen Vic.

However, Chelsea is caught by her husband as she returns home and is forced to pretend she left to get milk.

Gray begins to get suspicious but will he realise his wife is plotting against him?

The newlyweds agree to go the hospital to see their son as Chelsea gets a message to Kheerat about her plans to register Jordan’s birth.

However, when the businessman meets Chelsea to register the birth, the mum-of-one gets a shock.

EastEnders fans will know Gray has been meddling in Denise Fox’s (Diane Parish) relationship with her daughter.

In recent scenes, Gray convinced Denise not to visit Chelsea while failing to tell his wife her mum had wanted to see how she was doing.

Has Gray reached out to Denise and told her Chelsea is acting suspiciously?

Later, Chelsea visits her mum who fears her daughter’s deflated mood is because she’s not sleeping.

She gives her daughter some sleeping pills before sharing her concerns with Gray.

Denise advises her son-in-law to book a GP appointment to see if they can help the new mum.

Get the latest three-day weather forecast where you live. Find out by adding your postcode or visit InYourArea

Meanwhile, the father-of-three realises his wife isn’t eating and surprises her with a gift.

Gray may convince Chelsea he’s treating her to a relaxing weekend away so she can get some much-needed rest.

However, the lawyer may have convinced Chelsea’s family and doctor that the new mum needs professional help to cope with her traumatic start to motherhood.

Will Chelsea be sent away for treatment and kept away from Jordan as a punishment for trying to flee Walford before going into labour?