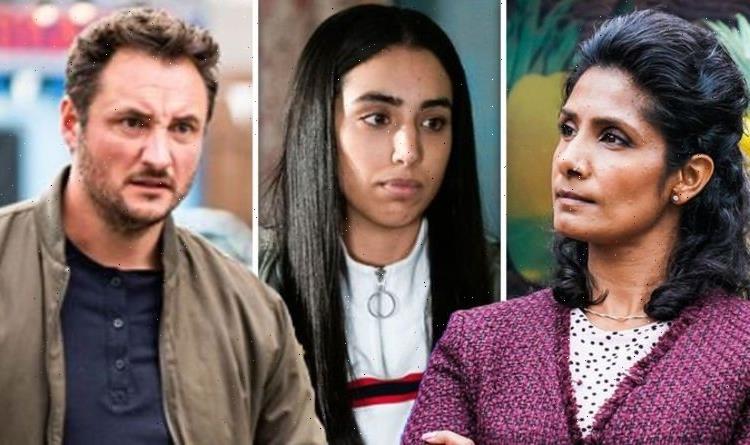 EastEnders’ Iqra Ahmed (played by Priya Davdra) was heartbroken when her sister Habiba Ahmed (Rukku Nahar) left EastEnders last year following the imprisonment of Jags Panesar (Amar Adatia) for a crime he didn’t commit. Iqra decided to stick by her then-girlfriend Ash Panesar (Gurlaine Kaur Garcha) but when the truth came out about the doctor’s involvement in the cover-up, the couple split up and Ash returned to her family home. However, if Habiba returns to the square with Jags’ baby, will the Panesars be torn apart for good?

EastEnders viewers discovered Habiba was pregnant with Jags baby after she fled the square.

Iqra was horrified the Panesars had turned their back on the parents-to-be.

Jags was subsequently killed in prison and Habiba decided against returning to Walford for the funeral.

However, will the new mum reach out to her sister who has since moved on with someone new?

If Habiba does return to Walford, Ash star Gurlaine teased it could spell trouble for her relationship with Suki Panesar (Balvinder Sopal).

Gurlaine spoke to Express.co.uk at the Together for Short Lives’ Ball.

She said: “Habiba and Ash never really got on because of the fact Ash really mistreated Iqra.

“She was being a protective sister and the involvement of Ash with Jags and him going to prison in the first place.”

“I think if there was a return it would be interesting to see the two face off,” she continued.

“What’s really important to Ash is family she has great family values.

“It’d be nice to see what she would sacrifice in order to have a relationship with her nephew.

“And I think it’s possible she’s more open to doing that than her mum.”

Suki has all her children under one roof and wouldn’t be pleased to see Habiba back in Walford.

She disliked the resident because her influence on Jags caused him to stand up to his mum.

Will Ash choose to have a relationship with her nephew over Suki?

“You will see coming up,” Gurlaine teased. “She entered the show as a really strong woman.

“She’d been away from her family for a really long time, she’d made it on her own, she’d come to the square, was living on her own with her own relationship but then she got swallowed up by her mum and the lies and the blackmail and the emotional abuse.

“I think what would be nice is for Ash to return as she used to be and you will see that coming up.

“We’ve just recorded some stuff and you’ll see her take a stand and really be proud of who she is which may not go down well with her mum.”

“They’re always battling each other, but I think that’s what would be nice,” Gurlaine added.

“We’ve seen that a little bit with the current storyline, her taking her stand against Harvey and the abuse she received and she does take a moment to think, ‘That’s not okay.’

“But we need to see that with her family as well.”