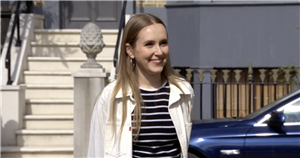 EastEnders fans spotted a glaring blunder on Monday night in the midst of a dark hit and run plot.

Learner driver Frankie had been heading out for an impromptu driving lesson in Zack's incredibly posh Jaguar, while he sipped beer in the passenger seat.

And as Frankie admitted it was the first time she'd ever driven at night, the pair turned to each other so they could talk in British Sign Language.

Which is when the car collided with a body as Frankie lost control, and they swerved to the curb to try and remedy the situation.

Shortly after, the camera panned over the victim – revealing it to be Nancy, Frankie's sister.

But fans were more reluctant to get on board with the fact that Zack would let Frankie drive his expensive card on a provisional licence – especially after he named it 'Lucinda'.

"You do know you're taking your life in your hands?" Zack's sister Sharon warned Frankie as she approached. "If you so much as scratch his car, he'll never forgive you!"

"Now #EastEnders making light of the real world and its rules," one quickly penned on Twitter. "Frankie going to take a driving lesson in Zack's car with no insurance. Because getting a learner driver on his car would be thousands, not five pints of lager!"

Someone else echoed: "Bit stupid giving Frankie driving lessons in a car like that!"

"What the hell was Frankie doing going for a drive with Zack in the first place? Now they knocked down Nancy!" another ranted.

And another followed up: "I'm sure being in charge of a learner driver and drinking alcohol is a tad against the law. No mention of putting her on a temporary insurance either. Tut tut!"

Things appeared to be heating up between Zack and Frankie ahead of the crash, as he revealed to Sharon that his feelings for Nancy "weren't mutual".

"So is it a driving lesson or a date?" Sharon quizzed.

"I wouldn't say no," Zack replied before turning to Frankie – and the two looked ecstatic as they shared a giggle in the car later that evening.