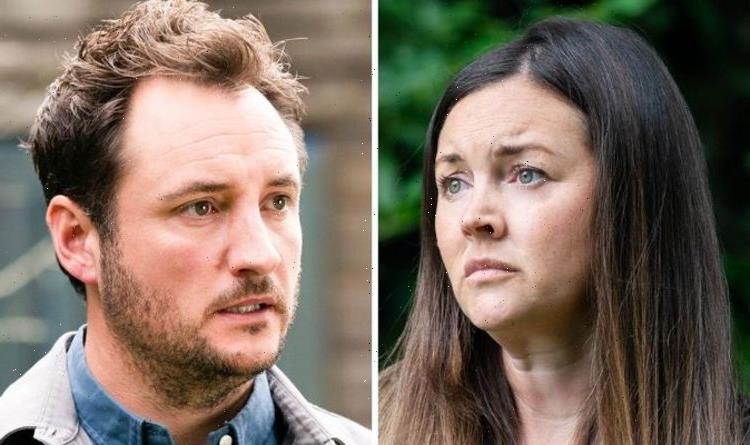 Stacy Slater (played by Lacey Turner) returned to the Square in last night’s episode of the BBC soap after being released from prison to find an excited Jean Slater (Gillian Wright) had thrown a welcome home party for her. There was heartbreak for Martin Fowler (James Bye) as Stacy admitted to him she had gotten remarried since their split. This week, Stacy and Jean’s relationship could come strained once more as an unwelcomed visitor outstays her welcome, resulting in Jean losing her mind.

In upcoming scenes this week, newcomer Eve Unwin (Heather Peace) shows up in Walford and surprises Stacy in the Queen Vic.

Stacy, who was in prison with Eve, embraces her old friend, although Jean is left fuming and less than pleased.

Stacy tries to convince Jean to let Eve stay with them and soon comes up with an idea to approach landlady Suki Panesar (Balvinder Sopal) with.

However, Suki is left fuming at the prospect of not being able to kick Jean and Stacy out of their home after weeks of trying.

Later, the pair tell Jean what happened with Suki, but when Stacy leaves, her mother firmly orders Eve to leave.

When Stacy returns, Eve is gone – will this drive a wedge between her and her mother?

Has Eve gone for good, or has she got another plan in store for Stacy?

Upon her return to the Square, Stacy revealed a huge bombshell to her ex-husband Martin that she had remarried whilst being away in prison.

However, fans are convinced they have already worked out who her new partner is, none other than Eve – could this be the reason she wants her to stick around so badly?

Speaking to Digital Spy, Heather Peace, who plays Eve, has opened up on what her character will be bringing to the square.

She teased: “[She] just can’t avoid getting into trouble, she’s got quite a quick temper and is a little bit erratic, but she’s very, very fair.

“When she does go and do something that is highly illegal or morally on the border, you will quite often understand why she’s doing it.

“But it’s probably something I wouldn’t do,” she explained.

Speaking to The Sun about her personal feelings about joining the BBC soap opera, Heather said: “I’m absolutely thrilled to be joining the cast of EastEnders.

“I’m loving working with such a brilliant cast, in particular Lacey Turner, we immediately got on and sparked off each other, which makes going to work easy and fun.”

Lacey Turney has also dropped huge hints about what is coming in Stacy’s future and shared delight at her characters “juicy return.”

“Eve’s arrival is causing a bit of trouble at home between Jean and Stacy because Jean thought she was going to have Stacy all to herself.

“So, it has caused a bit of tension between then as well as a few other people, of course, Eve managed to arrive and upset a few people straight away!

“It’s been a blast, though, and I can’t wait for everyone to watch it unfold!” she teased.