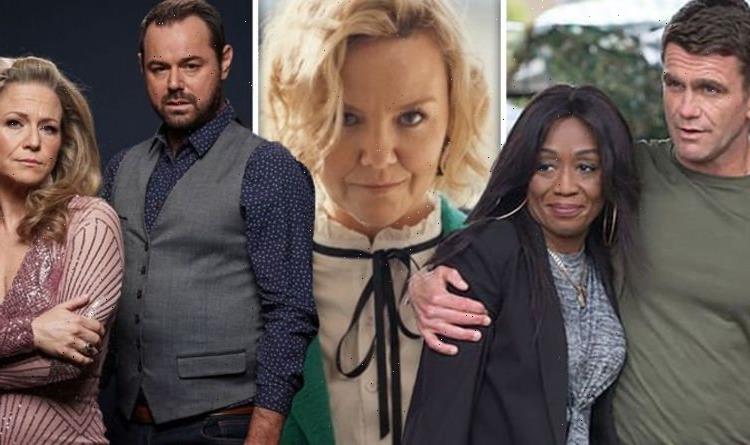 EastEnders stalwart Janine Butcher (played by Charlie Brooks) made a dramatic return to the BBC soap on Monday as she posed as a doctor. The soap villainess is back in Walford to track down her daughter Scarlett but it seems she could be distracted by the promise of romance after flirting with Zack Hudson (James Farrar).

In Monday’s instalment, Sharon Mitchell (Letitia Dean) was preoccupied with Phil Mitchell (Steve McFadden) and asked her brother to look after her son Albie.

Zack told his sister: “You’ve been snapping all money, you’ve been stressing out for days.”

“I’ve not been stressing,” she replied and he continued: “I’ll get Abbie from the nursery, take him to his appointment.”

“Because you haven’t told me anything,” he pointed out. “Sharon, what have you done?”

“Thank you for taking Albie,” she replied ignoring his question.

Later, Zack waited for the doctor to arrive for his nephew’s appointment.

“Cute,” Janine, who was posing as the doctor, commented before Zack answered: “Thanks.

“It’s actually my nephew who is here to see you but I open my mouth and it just comes out.”

“I’m sure we can get you something for that,” Janine replied.

“I am so sorry I’m late, there’s always something keeping me away but here I am, meters running, give me our worst.”

Official soaps spoilers confirm Zack will be charmed by Janine in Tuesday’s episode.

The caption reads: “Janine made her dramatic return to EastEnders tonight and she’s already up to no good, posing as a Doctor.

“With Zack being thoroughly charmed by her, he clearly has no idea he’s just met one of Walford’s most infamous residents…”

Zack was recently been dumped by Nancy Carter (Maddy Hill) but she may want to give their relationship another try once she’s calmed down.

The barmaid was horrified when he confessed to helping Frankie Lewis (Rose Ayling-Lewis) cover up Nancy’s hit-and-run.

She ordered Zack to leave but the couple has already split up and reunited once already.

Will the couple get back together only to be torn apart when Janine sets her sights on Zack?

The pair certainly have chemistry and Janine is known for going after who she wants regardless of who might get hurt.