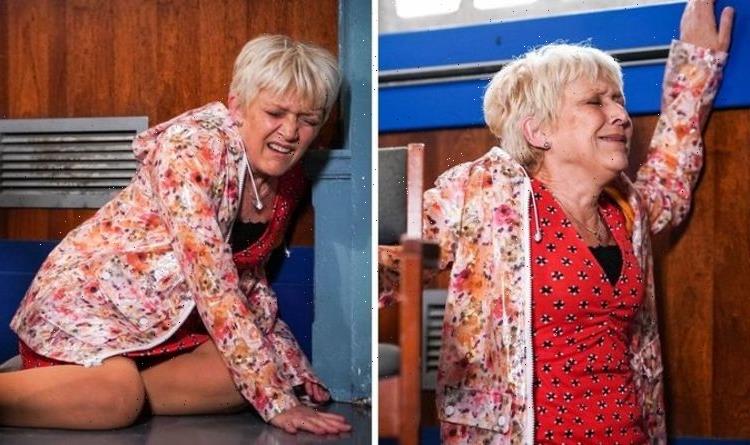 Eastenders: Jean gets confronted by the police

n recent weeks, viewers have watched EastEnders resident Jean Slater (played by Gillian Wright) who has been keeping a secret from her family. Jean thinks her cancer has returned and the only person she has told so far is Ruby Allen (Louisa Lytton). Jean told Ruby months ago in the hopes she wouldn’t press charges against Stacey Slater (Lacey Turner). Despite failing to help Stacey at all, more recently, Ruby confessed to Jean that Stacey hadn’t done anything wrong and she never pushed her down the stairs. Jean is yet to tell anyone what she knows, but in upcoming scenes, she ends up collapsing. But will she come clean and expose Ruby’s lies before it’s too late?

Stacey is currently in prison after Ruby framed her for pushing her down the stairs, even though the Slater clan member was nowhere near her.

Ruby has kept her dark secret to herself, although, in a moment of weakness, she finally told Jean the truth.

A shocked Jean encouraged Ruby to tell Martin Fowler (James Bye) the truth, but she is yet to come clean.

Not only is Jean worried about Stacey, but she has also got herself into trouble with drugs.

In scenes that aired on Monday night, Janine Butcher (Charlie Brooks) had a lucky escape after she got herself caught in a fire at Phil Mitchell’s (Steve McFadden) house.

However, Janine wasn’t alone in the fire, she was also trapped with Tommy Moon (Shay Crotty).

It was touch and go but luckily everyone got out alive, although it is still unclear how the fire started.

Shirley Carter (Linda Henry) was the last person in the house after Phil admitted she hit him over the head with something.

Unsure about what has happened Shirley goes after Jean who is frantically trying to call Kat Slater (Jessie Wallace).

“Have you seen Kat?” Jean asked Shirley as she walked through the cab office door.

“No,” Shirley replied with a worried look on her face. “Jean, what happened out there?”

“It was terrible the whole place was on fire,” Jean explained in a panic.

“How? I was there,” Shirley admitted as Jean asked: “You? How do you mean you were there?

“Why are you looking so guilty, Shirley? What on earth happened?”

“Nothing,” Shirley insisted. “Me and Phil we sort of had a ruck. I don’t know. I don’t know, I only went around there because of Tina.”

“Tommy was in there,” Jean told her. “He has been rushed to hospital. He nearly died. What did you do?”

Before Shirley could answer, two police officers walked in, and Jean assumed they were coming for Shirley.

“Tell them what you know,” Jean said to Shirley before one officer said: “We are looking for Jean Slater.”

“No, it’s not me you’re looking for,” Jean told them, although before she could finish her sentence, the officer continued: “We’d like you to come to the station to answer some questions about a drug offence.”

As the episode came to a close, Shirley and Jean just looked at each other in shock.

However, in scenes due to air later this week, it becomes clear that Ruby could have been the one to tell the police after the drugs in Jean’s garage.

Martin notices a text on Ruby’s phone from the police, thanking her for her help and informing her that a drug-related arrest had been made.

Although, things quickly take a turn for poor Jean because as she is interrogated by the police, she ends up collapsing.

She is then forced to admit a secret, before demanding they take her to the hospital.

Will Jean manage to expose Ruby’s lies before it is too late for her?

EastEnders returns on Tuesday at 7.30pm.