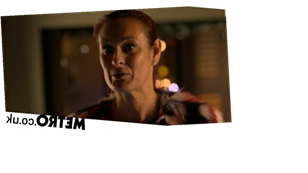 EastEnders viewers are convinced Tina Carter is still alive despite being killed off in tonight’s episode.

Gray and Tina had butted heads after she discovered the truth about Chantelle.

He chased her around his flat, and, in subsequent scenes, he was seen covering her body in wrapping paper while Denise Fox narrated creepily over the top.

‘No one sees them, men like that, they have a face for the world and you believe them,’ Denise said.

‘They paint a picture and then they get in your head and you start to see yourself the way they see you and then one day, the real world comes crashing back in.

‘That’s when they know they have to shut you up because the dead can’t talk.’

Although devastated by the scenes at hand, many believe that Tina is still alive and will return to Walford in the future.

‘I don’t think Tina is dead, have got a feeling she will reappear again at some point,’ wrote one.

Echoing a similar sentiment, another posted: ‘Maybe Tina isn’t dead, he only thinks she’s dead and she will be back for Christmas for the climax of the story.’

It was confirmed that Tina would be leaving Walford after Luisa announced her departure from the soap in October.

‘I just wanted everyone to know from me that I am leaving EastEnders at the end of the year,’ she said at the time.

‘After seven awesome years, it’s time for me to move on and get excited about other projects! I have had the most amazing time on EastEnders and will miss the cast and crew so much. But I am also completely excited about the new adventures that await me.

‘It’s been an amazing ride. Being part of the 30th anniversary, the live eps, the Carter family, working every day with my best friends. Danny Dyer, Kellie Bright and Linda Henry, I love you more than anything in the world.’

She continued: ‘Thank you to all the amazing fans for your support and love of Tina. I have appreciated it so much. Keep watching – there’s lots of drama to come!’ Tina first appeared in Albert Square in 2013.