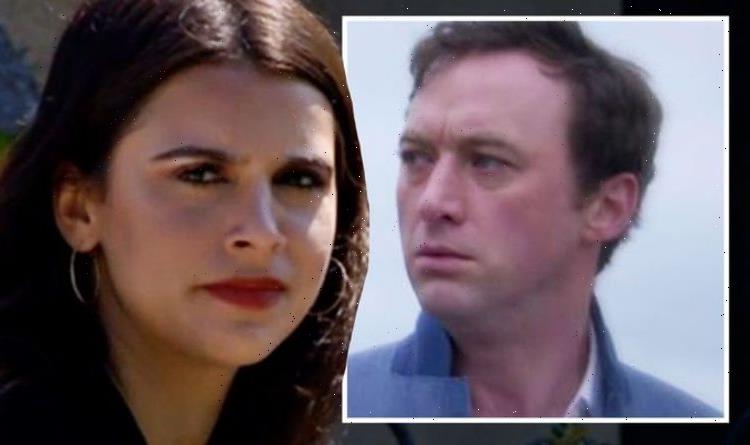 Meena (played by Paige Sandhu) was still revelling in getting away with murder during the latest episode of Emmerdale but there was cause for concern for missing Liam (Jonny McPherson). With his daughter, Leanna Cavanagh (Mimi Slinger) having been killed by the village villain, he decided to seek comfort by visiting the grave of the youngster’s mother. No one yet realises Meena was the one who ended the teenager’s life so the GP still sees her as someone lending some support – but will their connection turn into chemistry as they embark on a passionate affair on the ITV soap?

As Leyla Harding (Roxy Shahidi) worried over the disappearance of her husband, Meena put the pieces of the puzzle together and found him at his late wife’s graveside.

Liam was passed out on a bench when the villain walked over to him and offered him support in his hour of need.

“We don’t have to go back but I’m not leaving you alone, either. Nice here, isn’t it? No one to fall out with,” she remarked.

Having noticed the name Lara on a gravestone, Meena added: “Bet you couldn’t have ever thought about moving on from her, but you did, didn’t you?

“You’ve had two wives since. Sorry, clumsy,” she quipped as she tried to make light of the matter, but the GP didn’t seem to be feeling any better.

The villain continued: “What I’m trying badly to say is life goes in weird directions, right when you least expect it.

“One day, you will get over this pain and you will find a way through. I’m sorry, I’m so rubbish at this stuff, aren’t I?”

Offering the first glimpse she could feel something romantic for Liam, Meena said: “Come home, Liam. People care about you.

“I wouldn’t drum up half the crowd if I went missing,” she added before the grieving father explained why he couldn’t go back.

“I can’t go back. Everywhere I look, I see [Leanna] looking back at me. I see her in a jacket or a pink hoodie, laughing and taking the mick out of me.”

“Everything smells of her, everything is filled with her and I feel like I’m suffocating or drowning. I never imagine grief could feel so much like drowning,” Liam declared.

“Well, you’ve certainly had a lot of experience,” Meena callously said before the GP hit back as he added: “This is a whole other level and I cannot see a way through it.”

Trying to come up with a solution to help her neighbour get through his grief, the villain began discussing the fallout from the first person she killed.

“I had a friend once, she died and her mum the best thing she ever did was clear everything out. She figured what she wouldn’t see wouldn’t hurt her.

“Makes sense, doesn’t it? And what good is any of her stuff to you? I mean, that’s just masochism. What you can’t see won’t hurt you anymore. Shall we go home now?”

Somewhat spritely given the topic of the conversation, Meena walked off and was joined by Liam as they returned to the village.

Turning up at the village shop with the grieving father in tow, the villain said to Layla: “Look who I found?”

The GP’s wife was full of questions, but Leanna’s killer interjected as she explained: “Leyla, he’s drank a bottle of whiskey and is probably a little fragile so give him some space.”

“I’m fine, sorry for alarming everyone,” Liam told the search party and his wife tried to get him to go home.

“Do you mind if you don’t? It’s just I can’t bear any fuss at the moment. I just need a shower and then I will meet you back at home,” Liam replied.

However, before walking out of the shop, he turned to the villain and said: “Thanks for the chat, Meena.”

“Any time, Liam,” she replied and this was the biggest hint yet something could happen between the nurse and her boss as it seems he will spend more time turning to her for support.

When Leyla began venturing home, she saw her husband throwing out all of his daughter’s possessions in a rage.

He told his wife she could “either help or stay away,” with Leyla opting to leave her husband be for a while.

After discovering it was Meena who gave him the idea, Leyla said to her: “It’s not just stuff, that is memories, precious memories that one day he is going to be so desperate to hold on to, only he’s not going to have any of it now, is he?”

“God, what were you thinking?” she asked Meena before walking off with her former lover, David Metcalfe (Matthew Wolfenden).

As David is the villain’s boyfriend too, this could’ve been the last straw for Meena who might end the relationship.

Knowing her boss’ marriage is on the rocks, she could seduce him and begin a steamy affair with the GP in an almighty twist.

Could this be the point Liam discovers what really happened to his daughter as he gets ever closer to her killer?