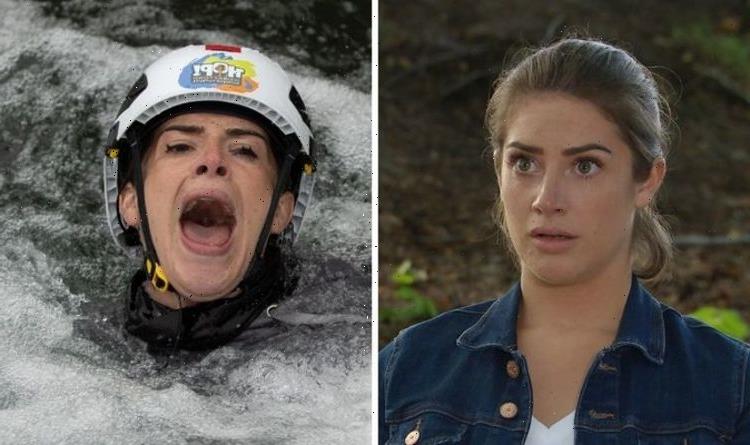 Monday night’s Emmerdale saw a dangerous rope bridge above a canyon collapse in one of the most dramatic sequences ever to be filmed on the ITV soap. Viewers watched on as Manpreet Sharma (played by Rebecca Sarker) and Charles Anderson (Kevin Mathurin) plunged into the menacing waters after falling off the bridge. In the next episode, David Metcalfe (Matthew Wolfenden) and Victoria Sugden (Isabel Hodgins) will also be left fighting for their lives – but will they all survive?

The drama unfolded in Monday night’s episode when a group of Emmerdale characters visited a survival challenge.
During the episode, Manpreet and Charles fell from a great height from a suspended rope bridge that collapsed while they were climbing across it.
In Tuesday’s instalment, David and Victoria are left clinging onto the broken rope bridge.
However, they end up in the icy waters below with Manpreet and Charles fighting for their lives.

The fall will not be the only terrifying moment for Victoria, with the soap’s boss dropping a clue about her “slipping away”.
When discussing the intense scenes, director Duncan Foster explained: “The maze is amazing, it’s unbelievable. There have been times when we’ve been filming and we’ve taken a wrong turn and we’re at a dead end.
“The rapids were fantastic and there’s a lovely scene with David and Victoria where we had incredibly fast-moving water.
“We played an emotional moment with the two characters clinging to this rock where they both know that she’s slipping away and just as David’s trying to grab hold of her he gets engulfed by water and she goes very rapidly (ignore the pun) over the waterfall.”

Speaking of the bridge stunt, Charles actor Kevin said: “We were so high up, about 60ft above the water.
“When the VFX are in it will look like the rope bridge is suspended between two cliffs but in reality, one side was attached to a crane.
“It didn’t look inviting at all but the way they constructed and designed it, it looked fantastic. I looked at it and thought, this is my job, amazing!
“Rebecca was so comfortable walking across the bridge and I was holding on for dear life like a mug.”

Rebecca revealed how complex it was for everyone to film the bridge collapse.
She said: “The bridge stunt was not only a feat of imaginative prowess but also of technical excellence.
“So complex was the set-up of the bridge – it took three hours each time to reset it – that we as actors felt a certain pressure to do the shot justice.”
The star explained her heart couldn’t “fail to miss a beat or two when you’re suspended with no safety harness on a Tarzan-like rope bridge with a 60ft drop below into a water-filled quarry”.

Matthew admitted he was “not great with heights”, describing the experience of filming the bridge scenes as “terrifying”.
He added: I was pretty nervous about the bridge but it all flipped with the water stuff as Izzy wasn’t too confident in the water and I love being in the water. It’s funny because our characters were so opposite to us.
“Victoria was supposed to be scared of heights and David is trying to help her but in reality, it was the other way round. I was petrified and Izzy took it all in her stride.”
Will Victoria not make it out of the water alive, or will she be saved and live to tell the tale?
Emmerdale airs weekdays on ITV.