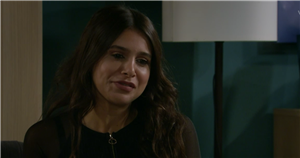 Emmerdale fans seem to believe that Meena Jutla could potentially murder her boyfriend David Metcalfe and Victoria Sugden in a twisted double killing.

The deranged nurse who has already murdered once in the village, has been swapping her partner's strong medication with paracetamol in order for him to recover slowly and to keep him in her sights.

But as the scenes began to unravel further on Thursday night, some viewers believed that both characters could be potentially killed off.

One fan penned: "Be careful Victoria Meena could kill you."

While another said: "Meena gonna kill David off – frankly the stupid b*****d deserves it."

A third worried fan wrote: "Wow she is one nutter trying to kill off David."

But some viewers also believed that Meena's storyline resembled the hit film Misery.

In the 1990 classic, viewers see an obsessed fan imprison her favourite writer after he experienced a car accident.

As some viewers have been down this chilling route before, they took to Twitter to air their thoughts on this too.

One fan speculated: "Guarantee you David will be locked in that bedroom for weeks with people asking Meena how he is and her bare-face lying telling them he’s fine when he’s getting worse and worse. A Misery type situation."

Another said: "Meena is so beyond help. As if David could…. Even if he wanted to, which he doesn’t It’s like the Barton stuff again or Misery."

"I think meena is going to go full on Misery with David!" A fourth exclaimed.

Later on in the programme, Victoria tried her best to see David, but Meena who is heavy handed on gatekeeping refused the farmer's daughter entry into his house.

Trying to get rid of her when she came knocking, Meena told Victoria that David had a terrible night and required rest.

Trying her best to pull at Victoria's heart strings, Meena also told her that it was heart-breaking to see David in such an unrecognisable condition.