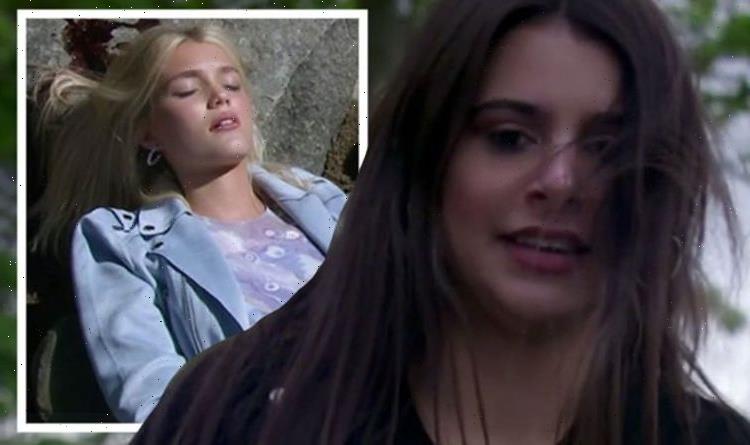 Meena (played by Paige Sandhu) has claimed her first victim in Leanna (Mimi Slinger) after the youngster discovered just how menacing her neighbour was in Thursday’s episodes of Emmerdale. Unfortunately, the teenager met a deadly end as the sinister nurse confronted her after learning she had killed a friend of hers years before. However, those watching at home were a bit confused by Leanna’s exit as they’ve discovered a way the villain of the ITV soap might have incriminated herself.

The showdown between Meena and Leanna happened after the latter got her hands on an old bag of the villain’s to go travelling.

Within this holdall was a box of items and newspaper cuttings all relating to the death of a teenager the sinister nurse had been friends with at school.

Unfortunately for the killer, she let her secret slip and this left Liam Cavanagh’s (Johnny McPherson) daughter worried for her life.

Needing to get away from Meena, the youngster fled and ran through the graveyard until the two women met on the bridge.

Having no empathy for the teenager, the killer pushed her and Leanna hit the surface lying underneath the bridge.

For viewers watching at home, it seemed as if the teenager had hit her head but the second episode of Thursday’s double-bill revealed Meena hadn’t quite finished her off.

This meant the villain went down to the shallow river running below the bridge and began touching her victim’s hand.

She removed a ring Leanna’s boyfriend, Jacob Gallagher (Joe-Warren Plant) had bought for her ahead of them going travelling together.

As the youngster’s life slipped away from her, the villain walked off with no reaction to what she had done.

However, those watching at home took to Twitter to address how Meena’s DNA would be all over Leanna’s body.

Would that not be incriminating?

One viewer wrote on the social media platform; “Surely this idiot criminal Meena’s DNA will be all over Leanna #emmerdale?”

Another posted: “Why would Meena steal the ring Jacob gave Leanna. Would that not be incriminating? #emmerdale.”

Whilst a third remarked: “Meena’s DNA will be all over the place especially on Leanna,” as a fourth stated: “Meena’s DNA all over Leanna and she’s nicked the ring…both won’t be mentioned ever again #emmerdale.”

If the authorities discover the villain’s DNA is on Leanna’s body, will they arrest her and charge her with the youngster’s murder?

By the end of the double-bill, the whole of the village was looking for Leanna as no one had discovered her body.

However, when they do, her death is likely to have a lasting impact on the residents of the village and those who cared for Leanna.

One viewer wrote on the character’s exit: “I’m so sad. Leanna has been a brilliant character and Mimi a fantastic actress.

“I know that Liam’s reaction is going to be heartbreaking and it’s going to impact the whole village,” they continued as another added: “Gutted Leanna has been killed off.”

This brings an end to the actress who played the youngster, Mimi’s time on the show after five years causing trouble as Leanna.

The soap star has spoken out on her exit, explaining it was always planned her alter-ego was going to leave.

Mimi explained: “I am glad that the secret is out – I knew back in December that Leanna would meet an untimely death but I wasn’t told any other details until just before the scripts were published.

“It has been hard not to let on to anyone. I am sad to be leaving the Emmerdale family on one hand but so excited by what may be in store in the future.

“I am so excited by the storyline and the opportunity that I have been given to bring some drama to the Dales.”

The soap star added: “I had taken the decision to leave the Dales and I was so looking forward to hearing how the producers were going to engineer my exit.

“When Jane Hudson told me about my storyline, I have to say that I was shocked but so excited to be given the opportunity to be challenged and show my acting abilities.”

“Of course, it is a very sad storyline and has been very emotional for me,” the actress explained of her character’s ending,” `Mimi continued.

On what she will be doing next, Mimi said: “Well, this industry is very uncertain! I am very keen to pursue other acting opportunities.

“Fingers crossed for anything in the pipeline. I definitely want to keep acting, I absolutely love it and can’t see myself not doing it!

“I would love to do something with my music too, as I am a singer and songwriter. I have also recently started modelling and have already done some fantastic, fun jobs. I do love it and am learning a lot.”