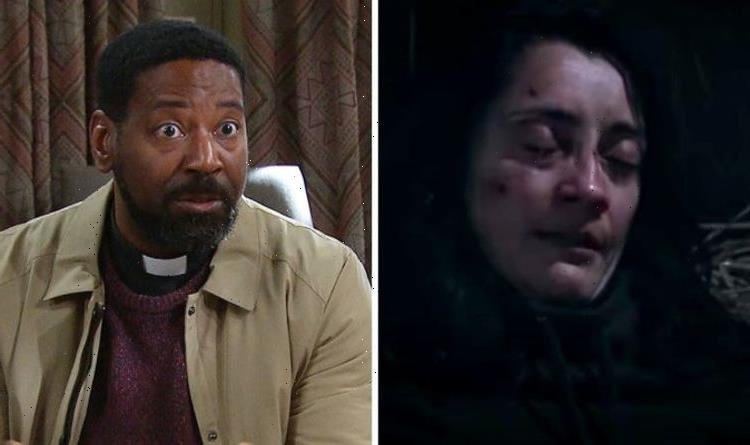 Charles Anderson (played by Kevin Mathurin) has been growing seriously concerned about Manpreet Sharma’s (Rebecca Sarker) whereabouts in Emmerdale recently. In Thursday’s double bill of the ITV soap, the vicar decided to go looking for Manpreet who was being held captive in a barn by her psychopathic sister Meena Jutla (Paige Sandhu). However, Charles ended up getting involved in a devastating accident that may have killed Manpreet.

However, Meena decided to make a run for it into nearby woodlands to avoid the consequences of her evil actions after Manpreet told Liam she’s killed his daughter Leanna (Mimi Slinger) by pushing her off a bridge last year.

A furious Liam went running after the villain in the woods, leaving as seriously weak Manpreet and Vinny fending for themselves.

Meanwhile, Billy Fletcher (Jay Kontzle) and Dawn Taylor (Olivia Bromley) were trying to find out where Vinny was as he’d been missing when Charles approached the couple.

The vicar said: “Everything alright? Is there anything I could do to help?”

Dawn replied: “Not unless you know where Vinny’s gone.”

“Or Liam come to that,” interjected a concerned Billy.

Charles was confused as to why the pair were missing so Billy explained they were looking for Meena who “needed locking up”.

Emmerdale fans will know Billy discovered Meena was pretending to be carrying his unborn child in Wednesday night’s instalment of the ITV soap, which is what he explained to Charles.

When Charles asked why she’d do such a malicious thing, Dawn said it was because Meena’s “a nutter”.

Then the penny dropped for Charles who said: “Rishi [Sharma] (Bhasker Patel) said he’s had a bad feeling about Manpreet, the way that she just disappeared without warning.

“And since then he’s had messages from her, but passed on by Meena. Where was Liam going when you last saw him?”

Billy was meant to meet with Meena to discuss her fake pregnancy, and she sent him a text with her location which he forwarded to Charles.

“Manpreet might be in danger and I need to find her,” Charles told the couple before jumping in his car to go searching for Manpreet.

When he arrived at the remote location under the cover of darkness he started looking around for Manpreet when someone ran out into the road.

Charles was unable to brake in time and the character smacked into his windscreen and was left lying lifeless on the side of the road.

Charles pulled over and ran towards the person who he could have accidentally killed with his car.

It appeared as though the casualty would have been Meena who was last seen running from Liam in the woods, however, it turned out the serial killer had hopped into a lorry and fled the area.

Could Charles have accidentally killed his former flame Manpreet?

The vicar cares deeply for Manpreet which is the reason he went looking for her in the first place and would struggle to cope without her.

Will he decide to move away from Emmerdale if the grief becomes too much to cope with?