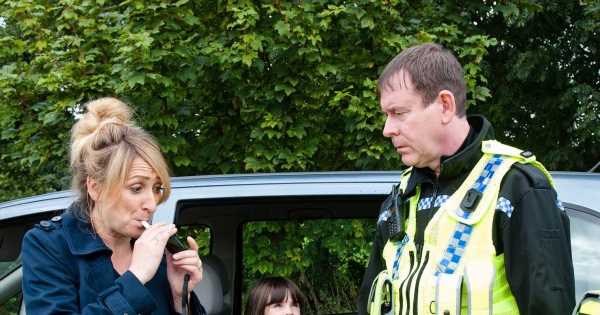 Andy Moore plays the role of the Dales' local policeman and has appeared sporadically in the soap since 2004.

He is one of the shows longest serving recurring characters and has often been called into the village to investigate crimes, killings and much more.

Away from being heavily involved with the Dingles and other troublesome residents, Andy Moore is an esteemed actor with a glowing resume.

Keeping his fans updated on his Facebook page, he often gives them a glimpse inside his life and other achievements. Aside from his work on Emmerdale, there's quite a lot more to Andy that viewers at home don't always see.

From his real name to a Coronation Street stint, an appearance in The Bill and even a pop career – Daily Star takes a look at Andy's life away from being PC Swirling.

When you go onto Andy's Facebook page – which happens to be his only social media profile – the link says something different to the name we all know him by.

Andy Whittaker is the name that comes up in the link of his Facebook page, meaning this was the name he originally gave the page when it was created.

The ITV website has also previously stated Whittaker as his surname.

And recently a pal of Andy's took to Twitter and said: "Our very good friend Andy Whittaker who plays PC Mike Swirling on the ITV soap Emmerdale definitely approves of the band’s new T shirt," which confirms his real name.

Corrie stint and other appearances Like so many other soap stars, Andy has popped up in quite a few of our favourite programmes in soap land.

Back in 2005 he appeared in Coronation Street as a driver, for two episodes.

Five years later he popped back up on the cobbles when he portrayed the role of a photographer.

Aside from primetime soaps, Andy has also popped up in the likes of The Bill, The Royal, and Fred and Marv.

In 2021 he popped up in a since deleted YouTube short film, Barry Glitter, as posted about on his Facebook.

This year on April 23 Andy took to his Facebook page to update his fans with his latest achievement.

Alongside the video link he penned: "Andy Moore staring in a music video for indie band Courting," which went on to rack up five reactions on his page.

During the coronavirus pandemic Andy produced and starred in a short 10 minute sketch.

The Last Lockdown Sketch was uploaded onto YouTube with a blurb that reads: "When your online consultation with your doctor goes one massive step further.

"The doctor instructs his patient through a step by step major operation procedure over Zoom."

He added in the caption: "Hasn't the last couple of years been strange and frustrating. As a mark of coming out of it this film ridicules the weird time we have just come out of with elaborate exaggeration and a rather dark twist."

Fans loved the film and one even penned a sweet message in the comments section: "That was excellent I was recommended by our mutual friend Susie Cakl to check it out my partner Kim really enjoyed it as she also loves you in Emmerdale."