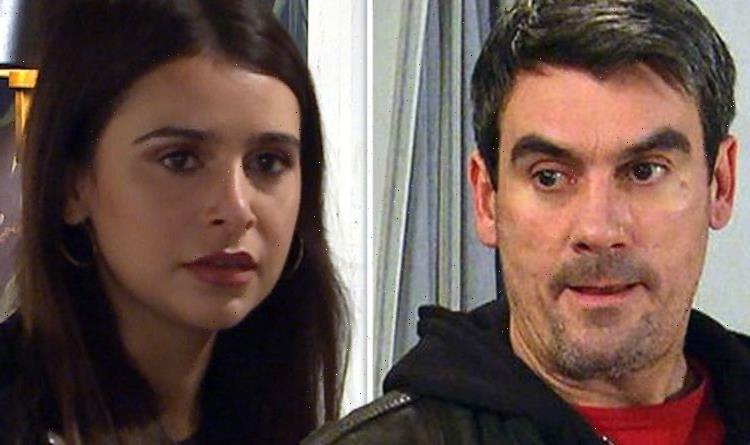 Liam Cavanagh (played by Johnny McPherson) has been rocked with grief over the untimely death of his daughter Leanna Cavanagh (Mimi Slinger). In tonight’s Emmerdale, he found an unlikely confidant in the form of Cain Dingle (Jeff Hordley) after rejecting Leyla Harding’s (Roxy Shahidi) support. However, will Cain begin to doubt the police’s observations and spark the downfall of murderer Meena Jutla (Paige Sandhu)?

In Wednesday’s episode of the ITV soap, Liam continued to struggle with accepting Leanna’s death and refused to engage with Leyla.

The grieving father was accosted by village vicar Charles Anderson (Kevin Mathurin) and their conversation was overheard by Cain.

“Liam, how are you? If you have a moment?” Charles asked and Liam replied: “I’m busy.”

“I don’t know if you’ve had a chance to speak to Leyla, we spoke yesterday about funeral arrangements,” the vicar explained.

“I’m Leanna’s father, Leyla was nothing to her why didn’t you come to me first?” Liam scolded.

“I just wanted her to let you know that whenever you’re ready to discuss laying Leanna to rest I’m there for you,” Charles said.

“And I know where to find you if that’s all?” Liam quipped.

“She’s worried about you,” Charles noted and Liam hit back: “Well she can save it for someone else.”

“Shared grief can be cathartic in a way, I know that you’re grieving but your wife is grieving,” Charles said.

“She has no idea, how could she?” Liam hit back before warning the vicar to leave him alone.

Later, Cain brought over some cans of beer to Liam and offered him a space to speak freely.

But, the pair mostly sat in silence while the village doctor struggled to hold back tears.

Cain wants to help Liam through this difficult time and understood his need to reject the vicar’s help.

The Dingle patriarch has a distrust for the police and may suspect their findings surrounding Leanna’s death to be inaccurate.

In a bid to help Liam cope, he may contact a corrupt police officer he knows to look over Leanna’s case file.

Emmerdale fans spotted several blunders with Meena’s murderous act and a second glance at the file may prove Leanna’s death wasn’t an accident.

Leanna wasn’t Meena’s first killing and the teenager lost her life because she unearthed clues relating to the death of someone the nurse was friends with at school.

The teenager death is at least the second murder Meena has gotten away with.

Therefore, it is likely the nurse would be prepared to go to extreme lengths to keep her crimes under wraps.

Could Meena have bribed the coroner who examined Leanna’s body to ensure her death was marked as an accident?

If so, Cain’s snooping may lead to the original report being unearthed or he may persuade Liam to have his daughter’s body examined again now he knows the doctor isn’t keen on rushing forward with the funeral.

Could a second post-mortem find traces of Meena’s DNA on Leanna from when the nurse removed Jacob Gallagher’s (Joe-Warren Plant) ring from her finger?

Emmerdale airs on ITV on weekdays at 7pm.