TheWrap is back with its annual breakdown of Emmy nomination reactions

Emmy nominations were announced Tuesday morning, so naturally, those who managed to get one are once again “honored” – or “deeply honored” and “thrilled” – though some were even “beyond thrilled” ut making sure to stay “humbled” and even “pinching themselves.” Nominees also bursted with gratitude and thanks, thanks to the Academy, the other shows and nominees, fellow cast members, the fans and of course, several streaming platforms that made their shows’ runs possible.

The 2021 reactions also brought an unprecedented amount of attention to the COVID-19 pandemic, mostly through the additive, “especially in such a challenging year.” “The Handmaid’s Tale” creator and showrunner Bruce Miller applauded the “amazing work of [their] cast and crew, and what they were able to accomplish in the midst of a pandemic” while “This Is Us” Executive Producer Dan Fogelman congratulated the team for “mak[ing] one of [his] favorite seasons during an impossible time.” While we were surprised “crazy time” didn’t get more hits, Lovecraft Country’s Jonathan Majors showed us the nominees’ originality by subbing it for  “historically chaotic year.” 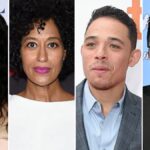 “Lovecraft Country” star Jurnee Smollett said that she felt like she was “living [her] ancestors’ wildest dreams,” while “Cobra Kai” showrunners Josh Heald, Jon Hurwitz, Hayden Schlossberg referenced their “humble YouTube beginnings” and their “badass Netflix arrival.” Daveed Diggs, who was nominated for his role in “Hamilton,” even asked if all this Emmy nomination craziness meant that everyone can “hang out again soon.”

But despite nominees’ gratitude and excitement for their nominations, they are truly most grateful for the journey along the way. While Billy Porter reflected on Pose’s production as a “healing journey,” Majors shows us there is no such thing as a break in show-biz with an encouraging “Our journey continues….”