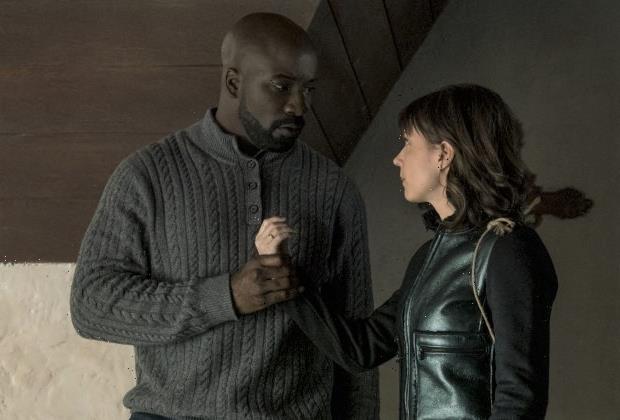 All Robert King was looking for was some chaos and quiet.

“Robert has wanted to do a silent episode of one of our shows for years and kept getting denied,” Michelle King says of her husband and fellow Evil/The Good Wife/The Good Fight co-creator. But the denials ended with this Sunday’s Evil, whichthe Kings co-wrote and which found the series’ three main characters investigating a case at a silent monastery: “Finally, it was time.”

Robert King, who also directed the episode, chuckles. “But it cured me” of the desire, he says, comparing making the hour to “putting one arm behind your back, trying to work a puzzle with one hand.” Post-production audio magic often allows shows to “kind of Band-Aid something together that otherwise just doesn’t work,” he explains. But that safety net didn’t exist for this week’s installment, in which Kristen may or may not have unleashed an ancient demon by uttering a single word within the holy establishment’s walls. (For a full recap, go here.)

Read on for the Kings’ insight into making the mostly dialogue-free episode, including the secret meaning behind David’s Magic Slate and whether Mike Colter and Katja Herbers actually stripped down for those funny fantasy sequences.

BONING UP | Prior to shooting, Robert King says, he watched the silent episodes of BoJack Horseman and Mr. Robot “purely to see how they got around some of the issues that come up with trying to do a silent episode… It can get a little boring to just do silence.” Evil dealt with that by throwing in what Robert King calls “reset moments” — like Ben, David and Kristen’s off-property meet-ups — in part “because otherwise, the plot kind of eludes you.”

SLATES ARE GREAT  | David, Ben and Kristen talk via Magic Slates throughout the episode, which “felt very funny in this formalized Catholic world that was so ancient,” Robert King says. “And yet, of course, one of the best ways to communicate and not waste paper was to write on those dumb things.” Adds Michelle King: “If also just felt real in that a monastery like this is not going to be rich. They’re going to be looking to save money, and those are cheap.” P.S. The Star Trek: The Animated Series one that David uses was a nod to Star Trek‘s presence on Evil‘s streaming site, Paramount+.

ON LOCATION | Aside from scenes that took place near the demonic cabinet, in the tombs or in the nuns’ area, the episode was shot on location at a monastery on Long Island, NY. “It was fun for everybody to go on location, because we had been so set-bound last season because of COVID,” Michelle King says. “This was one of the rare times we were out.”

FUNNY GIRL | Katja Herbers’ physical comedy abilities were “in the back of my head” while conceiving of the episode, Robert King recalls. “When we first saw Katja, we saw a reel of her stuff, and the funniest stuff was stuff in Dutch,” which is Herbers’ native tongue. He recalls specifically laughing at a clip from the film Weg Van Jou, in which Herbers’ character goes slip-sliding through some mud. In “S Is For Silence,” “We wanted this almost Laurel and Hardy-ness between her and an unexpected source, this nun who might have something spiritual about her, too.”

BARE NECESSITIES | The visuals of lips, and then of bare torsos, that flash in David and Kristen’s minds during the episode are evocative of the characters and their as-yet-still-just-fantasy pairing, but they are not actually Herbers and co-star Mike Colter, Robert King tells us. Because we definitely asked.