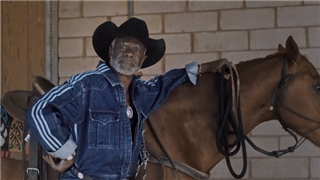 Glynn Turman, Emmy-winning actor and acclaimed cowboy and rodeo champion, is the face of Beyoncé’s new Ivy Park denim collection, showing off classic Western wear in an ad campaign that showcases the Black cowboy experience. His granddaughter Melinda appears in the ads with him. After 60 years in show business, and 30 years competing in the rodeo, Turman let his two worlds come together in the making of the launch. “I’m in the hippest campaign,” the 74-year-old actor tells Variety ahead of the collections launch on Aug. 12. “It doesn’t get any cooler than that!

Have you met Beyoncé?

Our family was actually vacationing together when the launch idea came about. It came up that she wanted to do something with her new line and I said she could use my ranch for that. I had no idea she was going to lasso me into the campaign!

You would do that to me. I like the whole “Lemonade” album, it’s a great one!

What did it mean to have your granddaughter Melinda in the campaign with you?

She’s an accomplished cowgirl, raised on the ranch like both of my kids. Her and I riding together in an ad for such a prestigious company has been tickling her to the core.

What do you think of Black cowboy culture in entertainment with shows like “Concrete Cowboy?”

I was very pleased with “Concrete Cowboy.” There are pockets of communities with Black youngsters who acknowledge their cowboy roots. There are 100 more stories that need to be told, and hopefully the world is ready for it.

Your free western-style summer camp, “Camp Gid D Up,” for inner-city and at-risk youth has been a passion for you and your wife. What has the effect of the camp had on those who participate?

First off, I learned that there was a need for that kind of space. I started that camp as a promise to Coretta Scott King, who called a summit after the ‘92 riots and asked some of the pillars of the community — if I could include myself in such distinguished company — to help ease some of the difficulties in our community. We’ve met wonderful young people who were able to reach goals that I don’t think they would have necessarily thought of, had they not gotten out of the environment [they were in] and [been] exposed to a different environment.

Being an accomplished cowboy and Emmy-winning actor, did you ever think your two passions would intertwine?

Becoming an Emmy-winning actor was much more on my radar than a rodeo champion cowboy. I was at a rodeo in Las Vegas and a young fella stopped me and said, “Can I get your autograph?” So I gave him my autograph, thinking he knew me from my movies. I asked, “Which of my movies is your favorite?” He said, “What movies?” He knew me as a cowboy and had no idea I was an actor! So I never would have known or thought that in my life that’s what I would be recognized for.

What was it like working with Chadwick Boseman in “Ma Rainey’s Black Bottom?”

It was an absolutely wonderful experience. He was a wonderful human being. I’m glad I got to know him. He was a talented man and we had a great time embarking on the “Ma Rainey” project. He’s just too soon gone.

Have you seen the Cynthia Erivo series about Aretha Franklin, or the Jennifer Hudson movie “Respect?” [Turman was married to the late music legend for six years before they divorced in 1984.]

I saw the first one. What I can say, though, is I had spoken to Aretha and when I asked her who she thought should play her, she said Jennifer. From what I have seen from the trailers, I think she’s absolutely right.

Watch Turman in the “Ivy Park” campaign below.