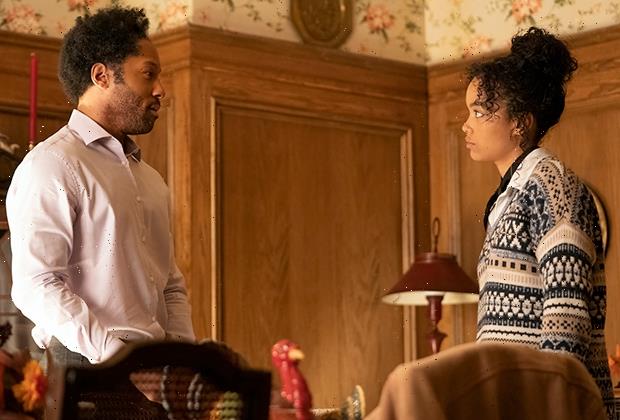 Gossip Girl welcomed us back on Thursday with a Thanksgiving tour de farce, gathering all of GG’s besties under one roof for an evening of confrontations, confessions and candied yams.

So, how did everyone — and we do mean everyone — end up breaking bread at Chez Lott? Why, shenanigans, of course! Let’s see if we can cover this all in one sentence:

Aki and his mom “stopped by” to see why Obie, who accidentally dropped the L-bomb on Zoya, bailed on their annual Turkey Day bro-down; desperate to rejoin society, Aubrey and Kiki tagged along with the Calloways, unaware of their destination; Max’s fab-u-lous birth mother tricked his dads into seeing one another, thus derailing their fancy dinner plans; and Kate and Jordan crashed the festivities to get enough dirt on Max to keep Rafa from exposing their identities. Whew!

The inherent drama (with a side of comedy) baked into this dinner was precisely why showrunner Joshua Safran chose to make it his Gossip Girl directorial debut. “I love farce, so I was like, ‘How can I make this the play I wish I had written at Tisch?’” he tells TVLine.

In addition to employing new techniques he’d yet to try, Safran also drew inspiration from some of the greats, admitting that he “robbed Spike Lee a little bit” for Julien and Zoya’s tense phone call about Obie. “The camera comes around them and they’re both in the center of the frame, because they think they’re communicating clearly,” he explains. “When they realize they’re not, they both shift over to opposite sides of the frame. I used to watch movies with the sound off, because it really teaches you if the story is being told.”

But the centerpiece of this episode was undoubtedly the dinner. From Aki and Audrey’s experimentation (“We’re going to be too busy f-ing Max, anyway!”) to Max’s situation with Rafa, the secrets spilled out like gravy over a mountain of mashed potatoes, gradually drowning everyone until they were all forced to confront their darkest truths — including how Davis kept Nick from seeing Zoya’s mother when she gave birth, thus robbing Nick one last chance to see her before she died. (Grim!) 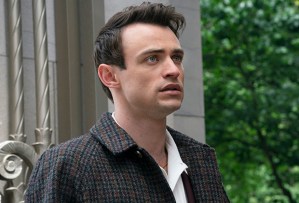 “If you have a good relationship with your family, they help you through problems,” Safran says. “For Zoya, a lot of bad stuff happens and it’s not resolved well. For Max, even if his parents are divorcing, they’ve created a very loving and accepting household for him. At one end of the table, you’re watching a family that can weather something very dark and disturbing together. At the other side of the table, you’re watching a family that cannot. Max and his dads had a more open communication style at home, which is why Max is more emotionally evolved than most of the other characters. He’s confident in who he is, and he doesn’t feel shame or judgment.”

Speaking of shame and judgment, Zoya also deduced that Julien and Obie had sex, which he initially denied until Julien came clean. Zoya swore off her sister for good (“We’re not sisters, we’re not friends — we’re nothing”), but if history has taught us anything, this cold war will thaw soon enough.

Meanwhile, Kate and Jordan sent Rafa their sneak footage of Max’s confession. (“I needed him to want me. When he did, I didn’t have to face what I was doing.”) While Rafa kept up his end of the bargain, returning Gossip Girl’s password and maintaining their anonymity, he also gave them a lecture about how they aren’t doing the good work they think they are. “You’re not making them better,” he told them, also revealing that he quit his job. (Byeeeee!)

Oh, Davis and Lola also got engaged. We should probably give her a round of applause or something for that. She really looks like she could use the attention — especially if her suspicions turn out to be true, and Davis only proposed “because he doesn’t want [her] to testify against him.” Um… gasp?

Are you thankful for Gossip Girl‘s return? Grade the midseason premiere in our poll below, then drop a comment with your full review.