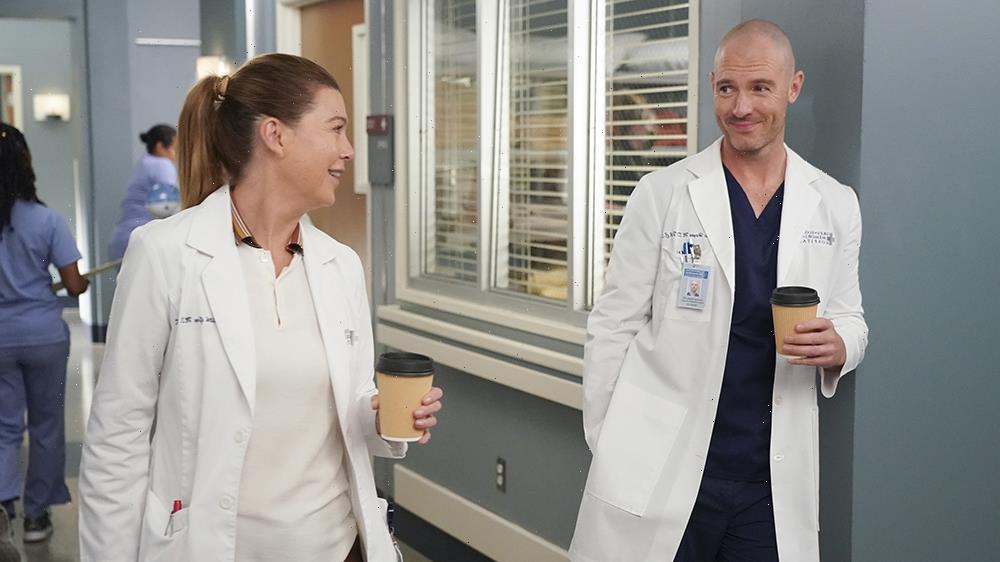 SPOILER ALERT: Do not read if you have not yet watched “Here Comes the Sun,” the Season 18 premiere of “Grey’s Anatomy.”

The return of Scott Speedman’s hunky Nick Marsh as the object of Meredith’s affection was the unexpected twist delivered by “Grey’s Anatomy” in Thursday’s Season 18 premiere. And the romance is bound to stick around, as Variety has confirmed what “Grey’s” fans have long hoped for: Speedman will be a series regular this season.

Although ABC teased the premiere as a crossover event with lead-in “Station 19,” there was virtually no appearance of anything related to Grey Sloan on the first hour — just some patients.

The “Grey’s” episode proper opened with a somber title card: “This season, ‘Grey’s Anatomy’ portrays a fictional, post-pandemic world which represents our hopes for the future. In real life, the pandemic is still ravaging the medical community. Get the latest information on how to protect yourself and your loved ones from COVID-19 at GetVaccineAnswers.org.”

This quickly signaled to fans that the drama was back to a pre-pandemic normal which would allow the cast to ditch the masks and let their million dollar smiles glow without restraint.

Meredith (Ellen Pompeo) is back in the operating room and seeing visions of her mother (Kate Burton, back for several episodes), or so she thinks. But instead she’s waking up and heading to a tempting job offer from Peter Gallagher’s Dr. Hamilton, who presents her with The Grey Center for Medical Research. The center is great, and who wouldn’t sign up to work alongside those perfectly-sculpted brows all day?

Meanwhile, Teddy (Kim Raver) and Owen (Kevin McKidd) were trying to get married in the park as off-kilter bicyclists skidded into the priest (who later died as a result of the injuries!) and interrupted everything, landing everyone at Grey Sloan.

But the biggest storyline update was the return of Nick Marsh, who Meredith caught up with while she was out of town. Marsh appeared in an episode in Season 14 as a transplant surgeon from the Mayo Clinic who had gotten a liver transplant himself. The character had such an immediate connection with Meredith during the one episode that viewers begged for his return, perhaps as an endgame romance for Meredith. Could true love be in the cards?

The events in Thursday’s opener picked up threads from the Season 17 finale, which aired in June. That episode presented a fast-forwarded look at the lives of key characters from summer 2020 through April 2021, going month to month. The arrival of COVID vaccine options represented hope for the show’s medical pros, as depicted in a montage of them all getting their first shots as they smiled through happy tears.

Meredith, who’d nearly died from COVID, and had been diagnosed with long COVID, finally performed surgery again, doing a successful double-lung transplant with Teddy on a patient they’d become attached to. And while every patient discharged after extended stays in the hospital were clapped out as they left, Meredith herself had ducked out on her discharge fanfare to spare herself the attention. But she couldn’t avoid an ovation after she and Teddy successfully pulled off the tricky lung transplant.

Meanwhile, Maggie (Kelly McCreary) and Winston (Anthony Hill) had postponed their wedding because of the pandemic, but got married on the beach. The same beach that Meredith had been during the season, as she floated in and out of consciousness, and was visited by past characters from the show who have died: Derek (Patrick Dempsey), George (T.R. Knight), Lexie (Chyler Leigh), Mark (Eric Dane) and DeLuca (Giacomo Gianniotti).

On that beach, right after the wedding, Link (Chris Carmack) proposed to Amelia (Caterina Scorsone), and she literally said nothing. They have a baby together, and have been living together in Meredith’s big house (along with many others). Luckily, they’re back to bickering with baby and still working on defining their relationship. Although the episode ended with a kiss and make-up, he proposed again — and she said “no” this time. Drama!

Jo (Camilla Luddington) adopted an extremely premature baby, Luna, whose mother (from a one-night stand) had died, and to whom she’d become very attached to in the NICU. We catch up this season with her struggling with all of the baby gear in the parking lot — kids are tough!