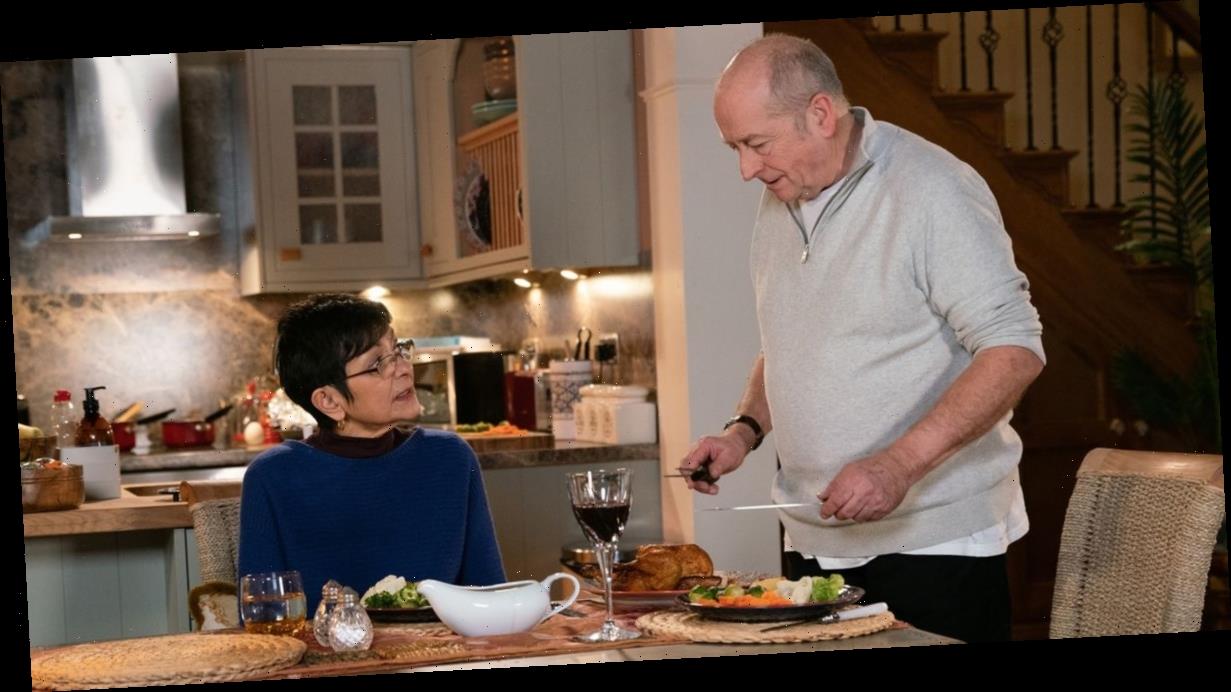 Charming, charismatic and a "real gentleman" – those were Leyla's thoughts when she first met the man who would become her husband. Little did she know that behind his suave persona lurked a controlling and manipulative side that would result in her being imprisoned in her own home.

Her situation greatly resembles Yasmeen Nazir's in Coronation Street , whose troubling relationship with Geoff Metcalfe has seen her morph from a headstrong grandmother to a frightened, timid wife cut off from her own life.

Geoff's behaviour has left viewers feeling incredibly disturbed, with 359 complaining to Ofcom last week after he cruelly forced his wife to eat her own pet chicken in a sick attempt to 'teach her a lesson'.

"I do find it quite disturbing to watch those episodes," 'Leyla', whose identity we have hidden, tells me. However, she agrees that it is good that the ITV soap is shedding light on the subject.

"I was really pleased, I’m thankful to Coronation Street for bringing it to the media’s attention," she says. "It’s something that happens behind closed doors and often not many people around you notice."

Leyla wed her Pakistani-born husband through an arranged marriage and initially believed that his behaviour was simply a result of cultural differences and the fact he was now living in a multi-cultural society.

"I put it down to more with his difficulties with that, not understanding that there was a deeper problem than that," she says. "As time went on I started to notice that one by one he wanted to take control of certain decisions, which I did not realise at the time was coercive control.

"The first thing I noticed that he had a problem with was my best friend being black and I thought to myself, 'Ok, because he’s from a country where they don’t see many other cultures, this is something new and he’ll need to adjust'. But from that point I realised that it wasn’t just one thing, it was one after the other and the list just carried on and on."

Leyla's husband managed to charm not only her but her friends and family who, to this day, struggle to equate his personality on the outside to his behaviour behind closed doors.

"Even to this day family and friends find it very very hard to believe what he was like behind closed doors to what they saw," she tells me. "He would be a lot more happier around other people, polite, they thought he had a really good sense of humour. He ended up making a lot of people his friends because, the way they saw it, there was nothing wrong with him."

However things changed as his jealousy escalated and he forced her to give up her job at Tesco's head office to prevent her from being around other men.

"He didn’t like me working, so that was the first thing that he wanted me to give up," she says. "I did not give up work until we had our first child and then that became a reason for him to tell me to leave. "It was all admin I did but I don’t think he liked that I was round male figures and my confidence made him worried. "

Leyla says that her husband was jealous of her relationships with her friends and family and did his best to isolate her from them.

"The male friends definitely had to go," she said. "There were no men around me by the time he left because even if a male neighbour said 'Hello' to me that was it, he would lead to him accusing me of having an affair.

"I was petrified if I went out of my door and I’d see my neighbour walk out the same time as me knowing that he would say politely ‘Good morning madam’. I’d keep my distance and say ‘Hello and bye’ when I bump into them. Sometimes it was too much to walk out of my door out of the fear the neighbour did come out and he was around."

Her husband would often accuse her of deliberately speaking to men to get their attention and would use abusive language towards her.

"He never got to the point of violence because of the law," she tells me. "The closest he ever got to it was that he’d snatch a hairdryer out of my hands and when he turned back and came for me I actually thought at that point that he was going to hit me and that was petrifying."

Leyla ended up trapped in her own home, paralysed over the fear of upsetting her husband.

"I felt that if I didn’t go anywhere or I didn’t see anyone that he couldn’t have a go at me," she says. "But then he’d find another reason to have a go at me, the plan wasn’t even working."

Her health began rapidly deteriorating due to her severe depression and sparked concern from her GP.

"I had chronic headaches all the time, I was isolated, I felt lonely, unhappy. Everything just felt – when I looked in the mirror I did not recognise myself," she says. "I felt like I was playing a character to the outside world, I walked out of that door pretending everything was fine. It wasn’t the real me.

"Every day he was upping his control and I started to realise that I had to get out and I stayed low because of the children, I really did not want to put them through that. My GP was very concerned about my health and she kept questioning me but I kept saying ‘No, nothing was wrong. I didn’t know why I was getting these headaches’."

After coming to the realisation that she needed to leave the relationship, Leyla decided to contact her GP.

"I didn’t speak to my GP directly but I wrote a letter about everything and I said that it was hard for me to talk about it," she says. "So she then arranged counselling for me and I started to speak to my counsellor. She quoted out to me that staying in a marriage like this for the children was not the right thing to do and that if I wanted to get out that there was help out there. But I had to prepare myself first before I could announce it to family and friends.

"It’s not that I had to just announce that I was leaving him, I had to throw out the reasons behind it and, at that time, it was quite difficult to speak about this. I knew deep down that I had to get out."

Leyla's nervousness over leaving the relationship certainly isn't unfounded and the danger is very real. According to charity Women's Aid, 87% of women killed by their ex-partner or spouse in 2017 were killed within the first year of separation.

She says her husband's dual-personality meant that her family were "very shocked" when she told them the truth.

"I think at one certain point people did think ‘Is she telling us the truth?’ and they found it very, very hard to believe."

After leaving the relationship she finally reunited with her best friend and began to get her life back together.

"I feel a lot of weight has been lifted off my shoulders because since he left I haven’t been insulted, I haven’t been intimidated," Leyla says. "My confidence where it had been dropped, I’ve slowly got myself back up again. I’ve started to work, I socialise. I feel like I’ve got myself up from the bottom.

"When I came back I did not know what everyone was up to or what the conversations were around people because I had nothing to do with the outside world."

Leyla believes that increasing public awareness about coercive control is an incredibly important step towards getting survivors out of abusive situations.

"I don’t think anyone can prevent it but I think awareness is important and if they’re aware they can go for help," she says. "I didn’t know about it and the police didn’t even take it seriously."

There are a number of telling signs that someone can look out for if they fear they may be in an abusive relationship, Women's Aid's Campaigns and Policy Manager Lucy Hadley tells us.

"Victims often explain it as walking on eggshells and that there are constant rules they have to abide by and the rules often change and they can't keep up with them," Lucy says. "There's punishment and consequences if they don't stick to those rules in that environment of control. It's that pattern of different types of abuse, that overall feeling that someone else has got the power and control in that relationship."

Lucy adds that friends and family may notice changes in the victim's behaviour including isolation, appearing nervous or hyper-vigilant and changing the way they dress or appearance.

"It's about listening and believing him and being non-judgemental, showing them that there is support out there, so sign-posting them to support services such as Women's Aid."

Since first meeting her ex-husband 20 years ago, Leyla does believe that things have changed for the better and that public awareness of emotional abuse is shifting. If anything, this is shown by the sheer quantity of furious viewers so outraged over Geoff's behaviour that they have complained to Ofcom – despite him never being physically abusive towards her.

Leyla says: "For anyone to sit there and watch her go through that… I think nowadays people wouldn’t sit back and watch."

Asked whether she has any advice for someone like Yasmeen, she says: "My advice would be do tell somebody. Don’t suffer in silence, because that’s what I did. I was so scared that I would not tell anyone and I think once your abuser knows that you’re isolated and alone, they’re in that power position.

"It doesn’t get better, that’s all I can say. It gets worse by the day."

*Coronation Street airs Mondays, Wednesdays and Fridays at 7.30pm and 8.30pm on ITV