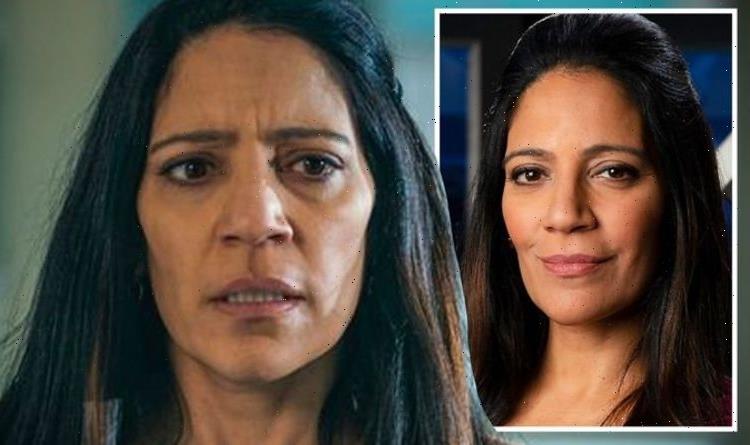 Vineeta has been a part of the Holby City cast for just over a year, with her character Lucky drafted in as a mental health nurse who would help those who had been affected by what they’d seen during the coronavirus pandemic. Unfortunately, as Autumn approached, the actress’s alter-ego was caught up in a bomb explosion at the hospital and has been recovering on the wards of the BBC medical drama. As the show gets ready to say goodbye to viewers in the coming months, here is everything you need to know about whether Lucky is going to be killed off ahead of the final episode of the television show.

Lucky was seriously injured during the bomb explosion and in recent episodes, Max McGerry (Jo Martin) told her she had been paralysed from the neck down.

In heartbreaking scenes, she has been seen asking her friend and colleague Max to help her end her own life, to which the former CEO of the hospital refused.

However, her plight continues in Tuesday night’s episode as she asks nurse Kylie Madden (Amy Murphy) for help.

Unfortunately, this leads Lucky to overdose and when Max realises what’s going on, she intervenes and manages to revive her friend.

The mental health nurse is adamant she cannot live with being a tetraplegic but Kylie has another idea to try and offer her some reassurance.

Kylie brings in an old patient of Lucky’s called Alex, who is also tetraplegic and contemplated taking his own life when he was first diagnosed.

This seems to offer Lucky some comfort as she and Alex get to talking about their condition, with the latter reminding the mental health nurse what she always told him.

During his darkest days, Vineeta’s character told him to think about everything and everyone he has to live for.

She is touched by how much progress her former patient has made but she is still unconvinced she is able to follow the same path.

By the end of the episode and despite her best efforts, Kylie is being given a stern talking to by Max about the help she has offered.

Although they started off on good terms at the start of the episode due to Kylie dating Max’s son Louis McGerry (Tyler Luke Cunningham), she warns his girlfriend to stay away by the end.

Despite Lucky being the one who managed to confuse Kylie enough to get the wrong amount of medication, Max believes it was the latter who tried to kill her friend.

She withdraws her permission for her son to be pursuing a romance with a colleague as Lucky lies in her bed.

There is no official confirmation on whether Vineeta is indeed leaving the show after over a year in the role.

However, her character’s persistence to end her life could see the show explore the subject of assisted suicide.

Vineeta has spoken out about her character’s storyline and how the figment of her imagination called Cassie Lockhart (Cassie Bradley) has had a huge impact on Lucky’s decision to die.

The actress said in an interview: “She goes through different stages of grief. There’s shock, disbelief, self-pity and thinking: ‘Why me?’

“Cassie is in fact a reflection of what’s going on in Lucky’s head; the insults Cassie throws at her, are thoughts she’s battling with.

“Lucky’s always tried to help others but often couldn’t do right for doing wrong and, here, is very much punishing herself.

“Lucky’s still got the emotional skills she’s always had and thinks she can make a difference to the pair,” Vineeta explains.

“My husband thinks Lucky’s a busy-body – and that I’m a bit like her,” she added but it seems her character is still persistent to end her life.

“Lucky doesn’t feel her existence has that purpose and meaning anymore and decides she wants to take her own life.

Like many character exits, it could be Vineeta’s exit will come when viewers least expect it as the writers keep the departure under wraps until transmission.

Holby City airs Tuesdays at 7:50pm on BBC One.

If you have been affected by any of the matters raised in this article, please follow the link here for more help and advice.