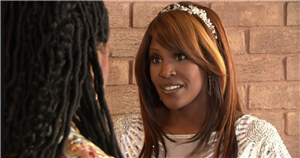 Hollyoaks fans were blown away with Martine’s Deveraux’s stunning wedding dress as she prepared to tie the knot with murderer Felix Westwood.

As viewers tuned in for the big day during Wednesday’s instalment of the hit Channel 4 soap, fans got a sneak peek at her gorgeous gown before she walked down the aisle.

The loving bride donned a white mermaid-style gown that hugged her envious figure and flared out at the bottom which beautifully complimented her hourglass figure.

It also featured capped sleeves and a cape in addition to the beautiful white and silver sequins which were embellished across the entire gown and allowed her to sparkle down the aisle.

It’s a rarity that weddings go without a hitch in Soapland, but for Martine’s big day it appeared as though nothing could stop the pair from making things official as the happy couple enjoyed a beautiful wedding.

Felix opted to wear a classic black tuxedo for the big day which he paired with a black button-up shirt and classic patent black shoes.

And viewers were overjoyed to see one of the first non-distanced kisses of the show since the UK went into lockdown during the peak of the Coronavirus last March.

Although he suffered an ounce of cold feet before he got to the alter, Mitchell soon set his straight and reassured his last-minute nerves.

But the drama soon kickstarted when undercover detective Nate joined the small list of attendees as he sat at the back of the church hall and watched the joyous event.

And things soon went from bad to worse, as the officer pulled out a notebook to compare the handwriting of the wedding guests to see if they could lead him to Lisa Loveday’s killer.

After Celest spotted him putting the notebook away, she knew something bad was afoot and informed the rest of the family immediately.

In true Hollyoaks fashion, Toby warned that he would “take care” of Nate in an attempt to keep his family united.

Fans soon took to Twitter to share their compliments of Martine’s beautiful dress online as she finally got her happy ending as viewers followed her rollercoaster relationship with Felix over the years.

One viewer penned: “Martine looks so stunning,” while another echoed: “MARTINE LOOKS SO BEAUTFIUL WOW.”

A third chimed in with: “Martine is such a stunning bride, but then again she’s always stunning.”

Hollyoaks airs on weekdays at 7pm on Channel 4.