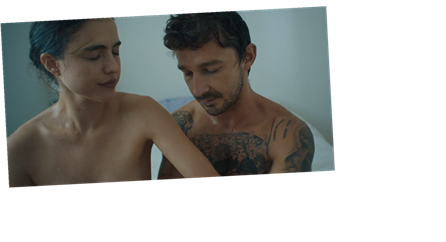 Shia LaBeouf and Margaret Qualley went full frontal for the new music video from Qualley’s sister, the recording artist known as Rainsford, “Love Me Like You Hate Me.” Shooting earlier this fall during quarantine, the filmmakers kept a tight set, with just a handful of people in the room, to allow the actors to bare their souls (and much more) for a short film that charts the highs and lows of a toxic yet addictive relationship. It released on October 23.

Eagle-eyed viewers might remember Rainsford from “Severance,” the final season premiere of TV’s “Mad Men,” starring as a lithe and slightly mischievous young woman modeling a fur coat for ad executive Don Draper, and looking like she has a secret. She’s also had appearances in “Mighty Fine” and “Ocean’s 8,” and has a role in the upcoming Freeform rom-com series “Love in the Time of Corona,” but where she’s really carved a space is as a singer/songwriter. She wrote “Love Me Like You Hate Me” two years ago, and was encouraged by her sister to realize it visually. The end result is this steamy and explosive new video, featuring intensely emotional choreography from Los Angeles-based JA Collective, with Rainsford writing and producing the music with Cameron Hale.

“I wrote it when I was coming out of a relationship that was a cyclical, toxic relationship, but that I was still very much invested in every day,” said Rainsford, whose personal pain is on full display in the video, as LaBeouf and Qualley ride the waves of a doomed love affair rife with emotional abuse and passion. But she now has some healthy distance from the breakup. “What’s interesting for me about songs is in the moment when I’m writing about these things, over time, my relationship to the songs change.”

The short features cinematography from Natasha Braier, who earned a Film Independent Spirit Award nomination for her work on “Honey Boy,” the 2019 film starring LaBeouf and inspired by his early life. To show the love story from both sides, “Love Me Like You Hate Me” uses a split-screen effect that Rainsford said “came together in the edit” but was inspired by LaBeouf’s creative partner and the film’s editor Luke Turner. Each panel unfolds as a single take, moving from day to night, and to achieve that real-time illusion, the filmmakers had to create a kind of moving set.

“The challenge for me and my team was to be able to capture the intimacy and vulnerability of Shia and Margaret without affecting that by our presence,” said Natasha Braier, who worked with a skeleton crew of just over a dozen people to complete the film. “How to be a fly on the wall, with as little footprint as possible, and at the same time choreograph two complex eight-minute shots that comprised not just the choreography, but also the crew moving lights, furniture, with dimmer controls across the street.”

They were a small team, “dancing around the actors, moving stuff and adjusting the lights as they passed through,” Braier said.

In the lead-up to the shoot with Natasha Braier, LaBeouf and Qualley rehearsed the choreography from which the dialogue-free film’s volcanic emotions spew. “After rehearsing three weeks shooting them on my 5D, I knew the choreography by heart and I could go through it step by step with my crew,” said Braier. “Once we started filming and all the pieces came together, it was pretty magical. Shia and Margaret left their hearts in every frame and at moments, it was hard to concentrate on the technical choreography and not get lost looking at them going through all those emotions.”

Also contributing to that emotional rawness is the video’s frank nudity, which Rainsford said “wasn’t really heavily weighted. It was just decided within the choreography that they wanted to have a moment in the shower, so it developed from there. It wasn’t a big decision.” Nor were intimacy coordinators brought onto the set. The film was shot in her house, where Rainsford said she watched the footage from another room separate from the actors.

And anyway, with such committed artists, Rainsford said, it’s best to get out of the way. “They’re so dedicated to what they do, even at the expense of their own bodies.”

Braier added, “They are both so powerful, intense, and mesmerizing to watch. It felt like being allowed to witness a sacred moment.”

Billie Eilish to Perform Beatles' 'Something' on SiriusXM's Alt Nation