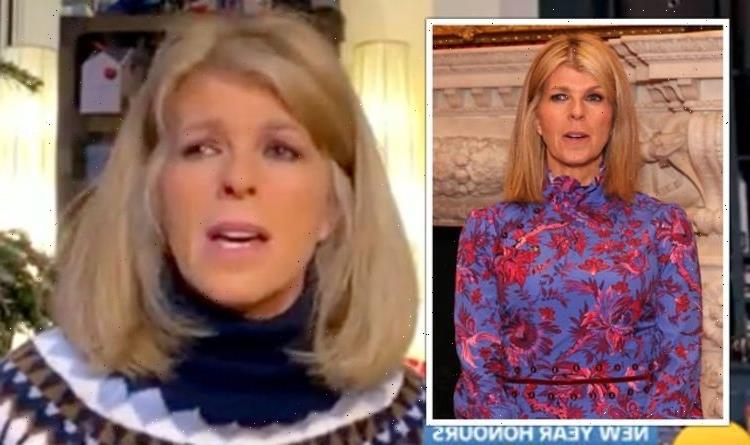 Kate Garraway has been awarded an MBE in the Queen’s 2022 New Year’s Honours list after being recognised for her services to broadcasting, journalism and charity. Despite being “thrilled” by the recognition, the 54-year-old admitted she felt “really awkward” about the honour. Appearing on Tuesday’s Good Morning Britain, Kate told ITV viewers she didn’t receive the MBE just for documenting her husband Derek Draper’s battle with COVID-19.

The Good Morning Britain presenter explained to hosts Susanna Reid and Richard Bacon: “I actually feel really awkward about it actually, I don’t really know why as I am thrilled to bits and incredibly honoured.

“But you just think, ‘What, me?’ And then you think it’s not real, so what happens is you get a letter saying you’ve been put forward for an honour and asked whether you’d accept it if you did.

“And actually Derek’s had a bit of time going in and out of hospital recently so I was actually with him at the time and my sister-in-law was in charge of opening letters which looked official.”

Kate revealed her sister-in-law opened her MBE letter and instantly thought she shouldn’t have opened it as it was “really exciting”.

She said she still didn’t quite believe she’d received an MBE until a couple of nights ago when people started congratulating her.

Kate explained: “On the outside it said MBE and I thought, ‘Well they’re not going to get it wrong. It must be that.’

“Inside they just say ‘Congratulations, we’re very pleased to hear, it’s lovely, we’re really thrilled to hear you got this honour.’

“So, I thought, ‘It must be true’, but I still didn’t quite believe it until New Year’s Eve when people started announcing it and started saying congratulations.

“But it’s a strange feeling because it’s things other people get. Do you know what I mean?”

Susanna asked: “Kate can I just establish, do you mean to say you read it in the papers before you knew you’d been given it?”

“Well yes basically,” she replied. “They had sent a letter saying ‘Would you accept?’ and I said, ‘Yes.’

“But I thought it was like for the Reality TV Awards when they say you’ll get a look in.

“I didn’t know if that meant you’d got it or not. I thought I better wait for the official, and I didn’t tell anybody. I didn’t even tell my parents.”

The journalist admitted she was affected by negative comments online from people wondering why she was on the New Year’s Honours list.

Kate clarified: “I haven’t got it for looking after Derek, it is for broadcasting and I think also for charity work.

“But there are lots of people who you think deserve it more, so it’s a strange feeling.”

However, a grateful Kate added: “I feel weirdly and surprisingly touched by it.”

Kate has been very public about her husband’s battle with coronavirus since he contracted the virus in March 2020.

Last year she documented his recovery in an ITV documentary called Finding Derek which she won an accolade at the National Television Awards.

Although Derek no longer had the virus, he has sustained long-lasting damage to his organs and requires round-the-clock care.

Good Morning Britain continues weekdays between 6am and 9am on ITV.