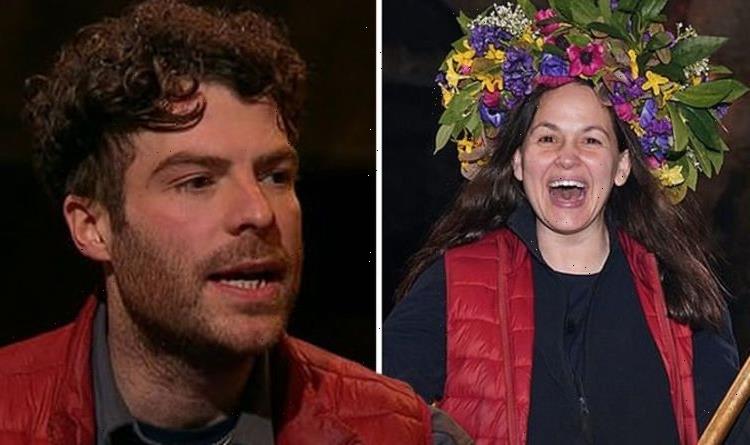 Giovanna Fletcher joined Zoe Ball on her BBC Radio 2 Breakfast Show on Tuesday to discuss the release of her twelfth book Walking on Sunshine. As the launch of I’m A Celebrity…Get Me Out Of Here! approaches, the radio host quizzed the Queen of the Castle on the moment she found out she had won the series.

Speaking on Tuesday’s show, Giovanna opened up on the moment she was crowned the winner of the first series set in Wales and not Australia.

She said: “It’s so surreal because beforehand the floor manager as he told us what we’ve got to do what the winner does what the runner-up does.

“He fired everything about the winner at Jordan like he didn’t know what was going on because we’ve seen him since.

“So when they said Queen I was just in shocked because I’d already not won it so it was really weird,” she continued.

“You were such an amazing family and I know you’re all still very close,” Zoe said.

“What a great gang you were – still on a WhatsApp group I believe.”

Giovanna replied: “We’re still on the WhatsApp group but when we see each other there’s this amazing thing where we literally just slot together.

“You know when you see people after a long time, actually it can be a bit awkward – there’s none of that.

“I think it’s testament to the bond that we created because also in Wales, we knew nothing about what we were walking into.

“Whereas in Australia obviously you kind of know the setup, you know what you’re going to be challenged with.

“But we knew nothing, obviously, like everyone else Covid has been a part of our lives.”

“We weren’t able to hug other people outside of our houses,” she added.

“So being part of this bubble where we could just literally be together and embrace each other and muck around and not have to worry about that – it was magic for us.

“And then knowing the reaction when we came out that other people [enjoyed] watching people in real-time connecting – I think it was a magical thing to be a part of and I just felt so lucky.”

“I love seeing him immerse himself in the experience,” she said. “He loves learning each dance but the beginning of each week is a bit hairy, it’s quite stressful.

“It’s a clean slate whatever you’ve done before, whatever your successes were at the weekend, they’re no longer there.”

She said: “I’ve got to say the way that they all support each other having the pros and the celebs down on the floor watching it’s such a gorgeous atmosphere.

“I feel immensely proud and Amy [Dowden] is a pure delight as well.”

I’m A Celebrity…Get Me Out Of Here! begins on Sunday 21 November on ITV.